As panicked crowds raced across the fairgrounds in Las Vegas, Steve Arruda lifted his wife, Elaine, over a fence to safety. He told her to run. Then he turned back toward the gunfire.

The 34-year-old courier and part-time hockey referee from Calgary had only been at the Route 91 Harvest concert for half an hour and had squeezed his way toward the front of the stage when he began to hear what he thought at first were firecrackers.

As he and his wife ran for safety, Mr. Arruda saw concertgoers pinned to the fence, some pleading for help. He left his wife and sprinted back to help strangers over the barrier just as a fresh round of gunshots began to ring out. "That's when I thought: This is life or death," he said. "I've got to get out of here." Seconds later, Mr. Arruda felt his foot go numb. He collapsed to the ground. He had been shot in the leg.

Amid the chaos and devastation of the worst mass shooting in modern U.S. history have been countless tales of heroism – concertgoers such as Mr. Arruda who put their lives in danger to save complete strangers. Their stories have been among the few bright spots in an attack that killed 58 people, including four Canadians, and injured nearly 500, including Mr. Arruda.

The shooting rampage by Stephen Paddock, a wealthy 64-year-old retiree, has renewed the political debate over gun-control legislation.

On Thursday, the National Rifle Association, the powerful gun-rights lobby group, said it favoured new restrictions on bump stocks, a device that enables semi-automatic rifles to fire in quick succession like a machine gun. Mr. Paddock attached bump stocks to 12 of the 23 rifles he brought to the 32nd floor of the Mandalay Bay Resort and Casino, allowing him to shoot a constant stream of bullets for 10 minutes. Republican lawmakers have signalled a willingness to support legislation that will curb access to the devices.

Mr. Arruda spent Sunday night in an intensive-care unit of a Las Vegas hospital with a gunshot wound to his upper leg. The bullet didn't hit any bones or arteries, but he still can't feel his foot or ankle and is waiting for further medical examination to learn if the damage is permanent.

He played down his heroic efforts helping others escape the gunfire, instead pointing to the dozens of others who stayed behind to tend to the injured in a medical tent, where Mr. Arruda hopped on one leg after he was shot. "Those people are the ones that are the real heroes," he said.

Inside the tent, he saw uninjured concertgoers rip off their clothes to help plug gunshot wounds. A stranger tore up Mr. Arruda's shorts to fashion a makeshift tourniquet for him. Someone else wrapped the material with a small flashlight to help Mr. Arruda twist the cloth to apply pressure.

Mr. Arruda lay on his back watching the chaos unfold. There was a man shot in the abdomen, going in and out of consciousness. A woman was shot in the neck. Patients were being carried on overturned tables into waiting ambulances.

Many of the concertgoers had spent the day drinking and were angry and scared. Mr. Arruda saw one man frantically trying to get to a seriously wounded friend who was being treated. Another man put him in a headlock and pulled him out of the tent. "There were people dying," Mr. Arruda said. "I was lying on the ground and looking backward at pools of blood everywhere."

As Mr. Arruda was on his way to Valley Medical Center, his wife, who had lost a shoe in the mayhem, was running with a crowd of concertgoers away from the festival and onto the tarmac of the nearby McCarran International Airport. Elaine huddled in a hangar, desperately trying to reach her husband by phone. Mr. Arruda was finally able to send her a text message around 2 a.m. to say he had been shot.

Mr. Arruda loves Las Vegas. He and his wife were married there four years ago and have taken at least 20 trips to the city since then.

Back home in Calgary on Thursday, he said he hoped to return to the city one day. But he doubts he will ever attend another concert or event at a large venue.

"Obviously, we're very glad to be safe and home because a lot of people can't say that," he said. "It's pretty traumatic just to know you were part of something so violent and senseless." 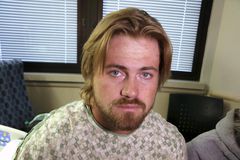 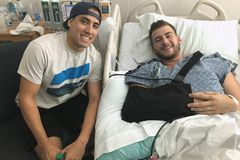 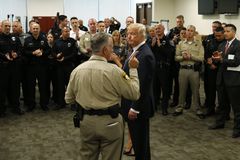 Follow Tamsin McMahon on Twitter @tamsinrm
Report an error Editorial code of conduct
Due to technical reasons, we have temporarily removed commenting from our articles. We hope to have this fixed soon. Thank you for your patience. If you are looking to give feedback on our new site, please send it along to feedback@globeandmail.com. If you want to write a letter to the editor, please forward to letters@globeandmail.com.
Comments