Canadian negotiators are demanding the United States roll back so-called "right to work" laws – accused of gutting unions in some U.S. states by starving them of money – as part of the renegotiation of the North American free-trade agreement. The request is part of a push by Ottawa to get the U.S. and Mexico to adopt higher labour standards under the deal.

Mexico, meanwhile, is campaigning to include its oil and gas sector in the deal.

These major moves on the labour and energy files came over the weekend at the second round of NAFTA renegotiations in Mexico City.

Explainer: NAFTA, Trump and Canada: A guide to the trade file and what it could mean for you

One group of negotiators spent all day Sunday working on the labour file, according to a schedule of the talks obtained by The Globe and Mail. One source familiar with the discussions said Canada wants the United States to pass a federal law stopping state governments from enacting right-to-work legislation; the source said the United States has not agreed to such a request. Canada believes that lower labour standards in the United States and Mexico, including right to work, give those countries an unfair advantage in attracting jobs.

Jerry Dias, the leader of Canada's largest private-sector trade union, said Ottawa's negotiators are: pushing Mexico on its corporate-sanctioned unions, which are accused of negotiating collective agreements unfavourable to workers; agitating for both countries to offer a year of paid family leave, as Canada does; and targeting American right-to-work laws that allow workers in unionized shops to refuse to pay dues, draining money from unions.

"I'm very pleased with the position the Canadian government is taking on labour standards," Mr. Dias, president of Unifor, told reporters outside the talks. "Canada's got two problems: The low wage rates in Mexico and the right-to-work states in the United States."

Mr. Dias, whose union represents a broad swath of occupations from auto makers to paperworkers, met on Sunday with Canada's chief NAFTA negotiator, Steve Verheul, and members of the team working on labour matters. He argued lax labour standards in the other two NAFTA countries are bleeding jobs out of Canada.

Another major, if significantly less controversial, subject at talks was Mexico's desire to enshrine its newly-opened energy market in NAFTA. When the deal was originally signed in 1994, oil and gas in the country was under a government-run monopoly. President Enrique Pena Nieto, however, has begun welcoming private foreign investment. Now, Mexico wants these open market rules written into NAFTA to ensure they are not rolled back by a future government.

Kenneth Smith Ramos, Mexico's chief negotiator, told reporters Saturday that his country wanted "mechanisms that allow us to integrate ourselves in a positive way in the energy sector" in order to "reflect the reform Mexico established."

Government and industry sources familiar with the United States and Canadian thinking on the subject say both countries like the idea of Mexico putting its energy market under NAFTA, as it would allow American and Canadian companies more opportunities to do business there.

Among the subjects dealt with over the weekend, said one source with knowledge of the discussions, was wine, a potentially touchy subject for Canada, where some provinces have tightly controlled distribution systems that make it harder for other countries to import their product.

Mexico has long supported NAFTA, but U.S. President Donald Trump's relentless rhetorical attacks on the country are testing that resolve and fuelling a popular backlash against the American government.

On top of his attacks on NAFTA – which Mr. Trump calls the "worst trade deal ever negotiated" – the President has repeatedly portrayed Mexicans as criminals responsible for bringing "tremendous drugs" into the United States. He has insisted Mexico will pay for a wall along the border, which the Mexican government has adamantly refused. On Sunday, Politico reported that Mr. Trump would also follow through on a plan to abolish Deferred Action for Childhood Arrivals, a provision that allowed undocumented immigrants brought into the United States as children to stay – a move certain to further inflame tensions.

As the talks unfolded, tens of thousands of supporters of a presidential candidate critical of the deal took to the streets of the capital for an energetic campaign rally. Former Mexico City mayor Andres Manuel Lopez Obrador is leading in the polls, threatening to wrest the presidency away from the ruling Institutional Revolutionary Party in next year's elections. Sporting burgundy baseball caps emblazoned with Mr. Lopez Obrador's slogan – "Mexico's hope" – they held aloft a massive, inflated effigy of their man.

While a Pew Research survey in May found 60 per cent of Mexicans believed NAFTA had been good for their country, Mr. Lopez Obrador's supporters expressed increasing exasperation with Mr. Trump and some suggested Mexico would be better off walking away from talks with Washington rather than trying to appease the U.S. President.

"Trump is a racist right now, and doesn't know much about Mexico," said Marco Antonio Paez, an 18-year-old high-school student, as he stood with a group of friends at the back of the rally. "If the United States wants to leave NAFTA, then they should leave. Then Mexico can find a way, maybe with Canada, to go on without the U.S."

Juanita Ramirez, a 40-year-old trash collector attending the event with her family, said she wanted her government to do more to stand up to the U.S. "The Mexican goverment should be telling Trump to treat the Mexicans better," she said, adding that she believed Mr. Lopez Obrador would do more than the current administration to fight back.

It's all put Mr. Pena Nieto in a tough spot: He wants to preserve NAFTA but fears courting public anger if he is seen to make concessions to Mr. Trump. In an address to lawmakers Saturday, he vowed not to "accept anything that goes against our national dignity."

The second round of negotiations continues until Tuesday. The next round of talks is scheduled for Canada in late September. Discussions will rotate between the three countries, with the aim of reaching a deal by the end of the year.

With a report from Reuters 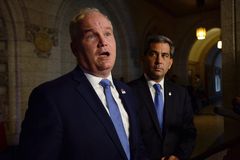