It was supposed to be a triumphant grand entry by China's tech giant into a future of driverless cars steered by Chinese ingenuity.

Instead, a Wednesday morning drive through Beijing by one of China's richest men quickly became an awkward glimpse into the difficulties the country must overcome as it attempts to match – and beat – technology under development in the West.

It began with Robin Li smiling into a camera from the passenger seat of a red Jeep. The billionaire CEO of search engine heavyweight Baidu was connected by live video link to a crowd of thousands gathered for the company's inaugural artificial-intelligence conference.

"I'm on the fifth ring road. I'm on my way to the venue," Mr. Li said, pointing to a colleague sitting beside him with no hands on the wheel.

The stakes of this demonstration were high: Baidu on Wednesday released the first version of Apollo – a driverless-car software system the company is posting free of charge online. Think of it as Windows or Android for cars. Baidu hopes Apollo can make it the dominant global company in autonomous cars.

And the Jeep using Apollo, Mr. Li said from the road, "is smooth. I feel good."

But as the video feed switched to an exterior view, it showed the Jeep appearing to cut off another car in traffic. It then merged across a solid white line.

Hours later, the Beijing traffic administration told The Globe and Mail it is investigating Mr. Li's hands-free jaunt. A person who answered the phone at the legal department said it believed he was not authorized to take a driverless car on one of Beijing's busiest roads. The company declined comment on the investigation.

China has big ambitions for vaulting into the forefront of automotive technology. Government administrators, investors and entrepreneurs are pouring money into electric cars and artificial intelligence. Baidu has set towering goals for itself, saying it intends to eclipse companies like Google and Tesla.

"We are very confident," said Qi Lu, Baidu's chief operating officer. In "three to five years, China will be the world leader in autonomous driving." He won effusive support from Bobby Hambrick, the CEO of AutonomouStuff, an Illinois company that used Apollo and its own hardware to make a basic self-driving car in just three days.

Mr. Hambrick compared the release of Apollo to the introduction of the iPhone. "This moment right here, this day, will be remembered forever in the history of transportation," he said.

Others had more sober takes, underscoring the gap between reality and the ambitious rhetoric of China's hopes to become a powerhouse in the digital economies of tomorrow.

Between Baidu and foreign developers of driverless cars, "the gap is very big," said Cui Dongshu, secretary-general of the Passenger Car Association in China. "I feel that there is not much innovation with Baidu, and they lack distinctive breakthroughs in their technology."

But Apollo is already capable of driving cars, in controlled conditions. At a demonstration area near Beijing's Olympic Park on Wednesday, SUVs and sedans equipped with the Baidu software navigated around in bright red and white, turning automatically when a sign was placed in their way.

The sedans relied on predetermined navigation co-ordinates, and a nearby ground station to ensure satellite location accuracy, to travel a predefined parking lot route. The cars drove competently, but the humans keeping watch acknowledged their limitations. "We cannot detect any obstacles so we cannot avoid them," said Fan Zhu, a Baidu senior software engineer who controlled a demonstration sedan.

That capability will come in the future, he said. A second version of Apollo will come in September, and a third by year's end. Baidu wants to move fast.

The company is deliberately taking a very different path from its competitors by adopting the "open-source" technique of posting its programs and even source code online. It's a bold idea that allows anyone with an idea for autonomous vehicles – be they driverless corporate shuttle buses or robot-driven pizza delivery services – to avoid the immense cost and time it would take to build such a system on their own.

"Even just a few guys in a garage can make a significant impact. You can think of this as something like a smartphone on wheels," Mr. Hambrick said.

Yet what is revolutionary in the hands of one person could be disastrous in the hands of another, and Baidu's model has raised safety concerns: "If you have the source code, you can do anything, pretty much – and you can do all sorts of things that may or may not be very safe," said Ann Williamson, a professor at the University of New South Wales in Sydney, Australia, and critic of driverless car technology. "If you just let anyone who has a bit of technical skill tinker with the technology, it cannot have good consequences."

Baidu's argument: by opening up its software, it can build a smart autonomous driving platform more quickly. On Wednesday, the company unveiled 50 partners that have signed on, including major international firms such as Ford, Daimler, Continental, Microsoft, TomTom and Bosch.

But relative to their Western competitors, Chinese companies are late to the game, and are leaning more heavily on "following and imitating," said Deng Zhidong, a Tsinghua University professor and director with the Chinese Automation Society.

The distance Baidu has to go may be best illustrated by the Jeep that drove Mr. Li around Beijing's fifth road. It is registered to Qian Piancheng, an engineer with German auto parts maker Bosch, which is working with Baidu.

That "vehicle is 100 per cent allowed to drive on the road," Mr. Qian said.

The reason: it's not particularly capable. The system on the Jeep is designed to buzz the moment the driver lifts hands from the wheel.

"That equipment is not good enough to free hands from driving," Mr. Qian said.

"Baidu," he added, "is fully entitled to promote the idea that their maps have reached the degree of accuracy required by driverless vehicles. It is another thing whether you can really drive a driverless vehicle on the road."

With reporting by Yu Mei 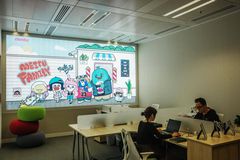 How China built a global rail behemoth that’s leaving Western train makers behind Subscriber content
June 12, 2017
China’s push to reshape global trade comes with high costs
May 13, 2017
Follow Nathan VanderKlippe on Twitter @nvanderklippe
Report an error Editorial code of conduct
Due to technical reasons, we have temporarily removed commenting from our articles. We hope to have this fixed soon. Thank you for your patience. If you are looking to give feedback on our new site, please send it along to feedback@globeandmail.com. If you want to write a letter to the editor, please forward to letters@globeandmail.com.
Comments