A slain Mexican activist, a Canadian mining company, allegations of extortion and demands for a "sexual evening" with an actress and Playboy model.

The murder mystery involving the death of a Mexican protester who led opposition to a mine owned by Blackfire Exploration Ltd. has taken a bizarre turn.

Calgary-based Blackfire was paying 10,000 pesos a month to the mayor of Chicomuselo, in the state of Chiapas, who also demanded that the company provide him with airline tickets and set up a liaison with a Latin soap-opera star and nude model named Niurka Marcos, according to legal documents obtained by The Globe and Mail.

In a complaint filed with the Congress of Chiapas and received on June 15, 2009, a Blackfire executive alleges "extortion" against the company by Julio Cesar Velazquez Calderon, the mayor of Chicomuselo, where Blackfire operates a barite mine.

Blackfire says in the complaint that it paid the mayor the money to prevent locals from vandalizing and protesting against its mine. It included documentation showing company funds totalling about 214,000 pesos, nearly $17,700, ended up in the mayor's bank account.

"We have been extorted by the mayor of Chicomuselo, who since we began operations has asked us for the amount of 10,000 pesos per month to prevent the Mexican co-operative farm near where we mine from taking up arms," Blackfire alleges in a legal request to have the mayor impeached.

Blackfire has been embroiled in controversy since the Nov. 27 murder of Mariano Abarca Roblero, a local activist who led opposition and protests against its mine.

Governor-General Michaëlle Jean encountered protesters chanting, "Canada get out," while on a visit to Chiapas this week. Ms. Jean called Mr. Abarca's murder "deplorable" and "inexcusable."

Three men with links to Blackfire have been arrested by Mexican police in connection with the slaying. One of the men arrested is a Blackfire employee and the two others have worked for the company in the past.

Blackfire has condemned Mr. Abarca's murder and denied any involvement. Its mine was shut down this week by Mexican authorities for alleged environmental violations.

Representatives of the Canadian mining industry concede the Blackfire case is threatening to tarnish its reputation at a sensitive time, as Parliament considers the proposed mining law.

"It could add fuel to the fire for those proponents of Bill C-300," said Tony Andrews, executive director of the Prospectors and Developers Association of Canada, in an interview.

Blackfire's complaint against the Chicomuselo mayor depicts a company exasperated with what it called an "unscrupulous" government official whose demands had become increasingly brazen.

The documents show the mayor asked for airline tickets to Mexico City for his wife, children and a colleague and that Blackfire complied.

The demands became "absurd," however, when the mayor asked for 100,000 pesos for the village fair. The documents indicate that 75,000 pesos were to be deposited into the mayor's personal account at the Bancomer bank.

As well, the mayor requested that Ms. Marcos, the TV star and nude model, perform at the Chicomuselo fair and spend a "sexual evening" with him.

"We decided not to meet those requirements, and for this reason the mayor started a smear campaign, making allegations to the priest of the region against the company, and we know that this incited the people who violently took the facilities of our company on June 10, 2009," the complaint says.

In an interview, Blackfire president Brent Willis said the company thought the payments were being made to the town and to sponsor the annual fair, not to the mayor personally.

"As far as Blackfire is concerned, we were sponsoring the town of Chicomuselo, and we felt that the mayor was abusing and taking the money for his own personal needs, and that is why we reported him to congress to overturn his immunity so that we could press criminal charges against him," Mr. Willis said.

"This isn't bribery. We were taken advantage of. We are fighting against it."

"All payments were made in compliance with the Foreign Corrupt Practices Act of Canada," Blackfire said.

Blackfire's complaint against the mayor names three people who it alleges were involved in vandalizing its mine and inciting violence. One is identified as Mariano Perez Roblero, a name very similar to that of the slain activist. 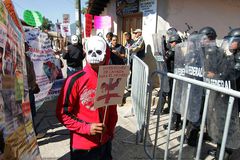 Mexican authorities shut down Blackfire mine
May 2, 2018 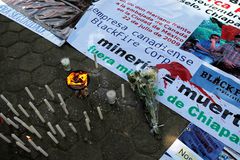 Canadian mining firm at centre of Mexican murder probe
May 1, 2018

Follow Andy Hoffman on Twitter @iamandyhoffman
Report an error Editorial code of conduct
Due to technical reasons, we have temporarily removed commenting from our articles. We hope to have this fixed soon. Thank you for your patience. If you are looking to give feedback on our new site, please send it along to feedback@globeandmail.com. If you want to write a letter to the editor, please forward to letters@globeandmail.com.
Comments