Newly formed Tropical Storm Nate was blamed Thursday for at least 22 deaths across Central America as it dumped rain across the region on a path that would carry it toward a potential landfall on the U.S. Gulf Coast as a hurricane over the weekend.

Louisiana officials declared a state of emergency and ordered some people to evacuate coastal areas and barrier islands, and evacuations began at some offshore oil platforms in the Gulf.

The U.S. National Hurricane Center said the storm could cause dangerous flooding by dumping as much as 15 to 20 inches (38 to 50 centimetres) of rain as it moved over Honduras, with higher accumulations in a few places.

It had maximum sustained winds of 40 mph (65 kph) by Thursday evening and was likely to strengthen over the northwestern Caribbean Sea Thursday night and Friday before a possible strike on the Cancun region at the tip of Mexico's Yucatan Peninsula at near-hurricane strength. It could hit the U.S. Gulf coast near New Orleans over the weekend at hurricane strength.

In Nicaragua, Nate's arrival followed two weeks of near-constant rain that had left the ground saturated and rivers swollen. Authorities placed the whole country on alert and warned of flooding and landslides.

Nicaragua's vice-president and spokeswoman, Rosario Murillo, said that at least 15 people had died in that country due to the storm. She didn't give details on all the deaths, but said two women and a man who worked for the Health Ministry were swept away by a flooded canal in the central municipality of Juigalpa.

In Louisiana, Gov. John Bel Edwards declared a state of emergency and mobilized 1,300 National Guard troops, with 15 headed to New Orleans to monitor the fragile pumping system there.

With forecasts projecting landfall in southeast Louisiana Sunday morning, Edwards urged residents to ready for rainfall, storm surge and severe winds — and to be where they intend to hunker down by "dark on Saturday."

Louisiana's governor says Nate is forecast to move quickly, rather than stall and drop tremendous amounts of rain on the state. State officials hope that means New Orleans won't run into problems with its pumps being able to handle the water.

Edwards warned, however, against underestimating the storm.

Officials ordered the evacuation of part of coastal St. Bernard Parish east of New Orleans ahead of the storm. Earlier Thursday, a voluntary evacuation was called in the barrier island town of Grand Isle south of New Orleans.

New Orleans officials outlined steps to bolster the city's pump and drainage system. Weaknesses in that system were revealed during summer flash floods.

The Bureau of Safety and Environmental Enforcement's New Orleans office said in a news release that as of midday Thursday, six production platforms, out of the 737 manned platforms in the Gulf, had been evacuated. No drilling rigs were evacuated, but one movable rig was taken out of the storm's path.

The agency estimated less than 15 per cent of the current oil production in the Gulf of Mexico has been shut-in, which equates to 254,607 barrels of oil per day.

The storm was centred about 45 miles (75 kilometres) west of Puerto Lempira, Honduras and was moving north-northwest near 10 mph (17 kph).

The forecast track showed the storm could brush across the tip of Mexico's Yucatan Peninsula late Friday night and then hit the U.S. Gulf Coast as a hurricane by Sunday morning. Forecasters said hurricane conditions were possible in Mexico Friday night.

In the Pacific, former Tropical Storm Ramon dissipated off the southwestern coast of Mexico. 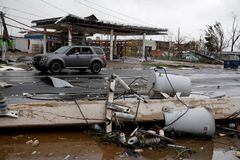 Trump compares Puerto Rico death toll with 'real catastrophe like Katrina'
October 3, 2017
Trump lashes out at mayor in Puerto Rico over hurricane response
October 1, 2017
Report an error
Due to technical reasons, we have temporarily removed commenting from our articles. We hope to have this fixed soon. Thank you for your patience. If you are looking to give feedback on our new site, please send it along to feedback@globeandmail.com. If you want to write a letter to the editor, please forward to letters@globeandmail.com.
Comments