Prime Minister Justin Trudeau came to Europe this week hoping to win support for trade initiatives such as the Canada-EU trade deal known as CETA. But if his first stop in Ireland is any indication, he faces an uphill battle to win over a growing number of critics of the deal.

A surge of Irish opposition to the deal is coalescing even as the country's newly minted and popular Prime Minister seeks to put down worries over a bad deal. The Irish government is banking on new free-trade relationships in a post-Brexit world, as its neighbour retreats from Europe. Meanwhile, the Canadian government is aiming to shore up international support for open trade at a moment when the United States is openly skeptical and tearing up deals.

Mr. Trudeau met his Irish counterpart, Leo Varadkar, on Tuesday and the two leaders spoke glowingly about CETA, pledging to do all they could to ensure its implementation across Europe. "The [Irish] government is a very strong supporter of CETA," Mr. Varadkar said after the meeting. "We are a small open trading economy and we've much more to gain from free trade than we have to lose."

Barrie McKenna: CETA, NAFTA, softwood and beyond – So little time, so much for Canada to do on the trade front

But his confidence belies the mounting opposition to the deal, known officially as the Comprehensive Economic and Trade Agreement, in Ireland and elsewhere. This week, a variety of Irish groups representing trade unions, small businesses, farmers and environmentalists came out against the deal and urged the Irish parliament not to ratify it. The largest opposition party has also tempered its support for CETA and last fall, the country's Senate narrowly passed a motion against the adoption of CETA.

"I think it's impossible for Europe to ratify [CETA] with all the increase awareness about it, because it is not a good deal," Patrick Kent, head of the Irish Cattle and Sheep Farmers' Association, said in an interview on Tuesday.

The opposition here could be fatal to CETA, which has taken more than seven years to negotiate and has been signed by Canada and the European Union. Under EU rules, all of the 28 EU member states must ratify the agreement along with several regional legislatures. Ireland has yet to indicate when it will move to ratify the deal, but if it doesn't pass through parliament here, CETA can't go forward anywhere.

Mr. Trudeau had been counting on Ireland as an early adopter. But CETA has run into the same problems in this country as it has in many other parts of Europe; in particular, there has been growing concern about the dispute-resolution system.

The agreement creates a new tribunal called the Investment Court System, which consists of a panel of judges that would settle disputes. Canada and the EU have hailed the ICS as a breakthrough in trade relations and the EU has hoped that it would lead to the creation of an international trade court.

However, critics say the ICS gives too much power to foreign companies, which can sue governments if they change policies that hurt company operations. Opponents say that limits governments' ability to protect the environment, worker rights and health care. And some argue the ICS is a dangerous move toward private courts and away from domestic legal systems. Belgium has challenged the ICS at the European Court of Justice and politicians in several countries, including France and Britain, have questioned the system.

It's also a concern to many people in Ireland, such as Alice Mary Higgins, an independent Irish Senator who backed the motion calling on Ireland to reject CETA. She sees the ICS as undermining domestic courts in Ireland and Canada.

And she's worried about the so-called "negative list" aspect of CETA, which means it applies to every part of the local economy unless otherwise stated. That differs from a "positive list," which would specify only areas where the agreement would apply. Ms. Higgins said Ireland submitted a small list of exclusions, which means CETA could apply to far reaches of the economy. For her, the ICS and the negative list are "toxic elements" that prevent many groups in Ireland from supporting the deal.

"Awareness and concern about CETA is growing," she said in an interview on Tuesday. Ireland is pro-trade and welcomes increased trade with Canada, she added, "but the message now that's beginning to come out is that you can be pro-trade and not be in favour of this exact model of trade."

Not every group in Ireland opposes the deal. Many business organizations, economists and exporters say CETA will benefit Ireland. They say CETA will open up new markets, especially for service industries on both sides. "It is a far-reaching agreement and provides a much-needed shot in the arm for Irish, EU and Canadian traders," John Whelan, chief executive of the Irish Exporters Association, said in a statement.

Mr. Varadkar, too, remains bullish on CETA. Even though he heads a minority government, he promised to push for ratification "as soon as possible" despite unrest among several opposition parties.

Mr. Trudeau also struck a confident tone, saying that while he understands the concerns about the deal, there remain many overall benefits.

"Any time we are engaging in ambitious trade deals, there are going to be people with concerns," he said on Tuesday. "Obviously, there's always going to be certain people with fears, but at the same time, the optimistic outlook that I know so many more people have, the fact that we are demonstrating at a time where there are worries about globalization, that we can sign good deals that are going to be good for everyone, not just the top 1 per cent and multinationals." 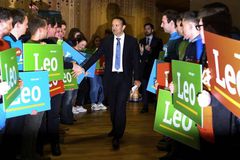