The president refused to express confidence in Bannon during an impromptu news conference Tuesday.

"He's a good person. He actually gets very unfair press in that regard," Trump said. "But we'll see what happens with Mr. Bannon."

Bannon was a key general election campaign adviser and has been a forceful but contentious presence in a divided White House. The former leader of conservative Breitbart News has drawn fire from some of Trump's closest advisers, including son-in-law Jared Kushner.

Though Bannon has survived being on the outs at earlier points in the administration, the president is being pressed anew to fire him. The anti-Bannon campaign comes as Trump is facing heated criticism for not immediately condemning by name white supremacists and other hate groups after deadly violence last weekend in Charlottesville, Virginia.

Bannon once described Breitbart as "the platform for the alt-right."

Speaking to reporters in Trump Tower, the president said Bannon is a friend and "not a racist."

That less-than-enthusiastic defence called into question Bannon's own assessment of the situation: He had been telling people that he believed his job was safe, following a conversation in recent days with new chief of staff John Kelly, according to a White House official who demanded anonymity to discuss private exchanges.

The decision whether to drop Bannon is more than just a personnel matter. The media guru is viewed in some circles as Trump's connection to his base and the protector of Trump's disruptive, conservative agenda.

A Tuesday headline on Breitbart equated his potential ouster to the president being urged to "Give Trump Voters Middle Finger." Ned Ryun, a conservative strategist who occasionally advises the White House, wrote on Twitter, "Cannot tell you how bad a signal it would be to realdonaldtrump's base if Bannon is forced out."

But Bannon's high profile and puppet-master image have at times irked a president who doesn't like to share the spotlight and bristles at the suggestion that he needs a liaison to his base.

In April, Trump diminished Bannon's role to that of "a guy who works for me."

The president doubled down on that dismissiveness at Tuesday's press conference, distancing Bannon from his unexpectedly successful presidential campaign.

"I went through 17 senators, governors, and I won all the primaries. Mr. Bannon came on very much later than that," he said.

Bannon's supporters say Trump is being urged by advisers such as chief economic adviser Gary Cohn and deputy national security adviser Dina Powell to fire him.

Kelly has also expressed concerns to Trump about Bannon, and is said to be particularly angry with a flood of negative stories about national security adviser H.R. McMaster that some in the White House believe are being leaked by Bannon. That's according to two people briefed on the personnel discussions taking place who are not authorized to speak publicly.

Kelly has grown weary of the conservative attacks on McMaster and believes that even if Bannon is not personally responsible for them, he has not done enough to quell them. Bannon has denied being behind the anti-McMaster campaign.

The public squabbling among White House advisers is precisely the sort of drama Kelly was brought in to stop.

The chief of staff is embarking on a weeks-long personnel review of West Wing staff and has indicated to aides that significant changes could be coming, according to an official familiar with Kelly's plans but not authorized to speak publicly.

Although Bannon enjoys a vocal core of supporters outside the White House, most of Trump's most trusted advisers long ago soured on him. Kushner and Ivanka Trump's opposition to Bannon's West Wing role is well-known, but they're staying out of personnel decisions about him, according to a White House official.

Bannon's backers include Rep. Mark Meadows, the head of the House's Freedom Caucus, an array of Breitbart-like media and the Zionist Organization of America, which has spoken out in opposition to McMaster.

He has told associates that he has no plans to leave the White House and would only do so if Trump fires him. He has been trying to keep a low profile during Trump's break from Washington and ride out the storm — the same strategy he employed during clashes earlier this year with Kushner.

At the start of the administration, Bannon was its driving force, a near-constant presence in the Oval Office leading the charge to roll back Obama-era regulations and push through the president's travel ban. Blowback to the botched introduction of the ban, which was rolled out quickly with little outside consultation, angered many in the administration, including Kelly, then head of Homeland Security.

In the hours before Trump spoke to the press Tuesday, Kelly was spotted eating lunch at a nearby hotel with aides. Playing on the TV screen above him was a cable news program with its ticker displaying speculation about Bannon's future.

Kelly did not look up.

Full transcript of Trump’s remarks, with comments on violence in Virginia
August 16, 2017 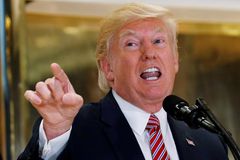 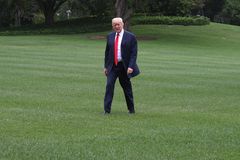 Opinion
Cosmopolitanism, Trump and ignorance as a weapon
August 9, 2017
Report an error
Due to technical reasons, we have temporarily removed commenting from our articles. We hope to have this fixed soon. Thank you for your patience. If you are looking to give feedback on our new site, please send it along to feedback@globeandmail.com. If you want to write a letter to the editor, please forward to letters@globeandmail.com.
Comments