On Monday, U.S. President Donald Trump stuck to his script, delivering a conventional address about American strategy in Afghanistan that pleased his fellow Republicans. On Tuesday, he threw the script out the window.

With an angry speech in Arizona, Mr. Trump exacerbated growing tensions with his Republican allies. He lashed out at the state's two Republican senators, one of whom is running for re-election. He rehashed his response to the violence in Charlottesville, Va., in inflammatory terms. And he placed the blame for his legislative setbacks everywhere except the White House.

Now, Mr. Trump is entering a crucial period with a historically low approval rating for a new president and a deteriorating relationship with members of his own party. The President is embroiled in a feud with Senator Mitch McConnell, the majority leader, according to The New York Times, and other Republican senators have publicly questioned Mr. Trump's competence and moral authority to lead.

Ibbitson: Again we see Trump enjoys running for president more than being one

In this curdled atmosphere, the White House is embarking on its most challenging stretch yet on Capitol Hill. When Congress returns to session in September, it must pass legislation both to fund the government and to raise the limit on government borrowing – or face potentially dire consequences. Then the Trump administration is hoping to launch its bid for tax reform, also a difficult prospect.

The next two or three months will be decisive in determining whether the Trump presidency is successful or not, said Zach Wamp, a former long-time Republican member of the House of Representatives. "I don't think his presidency is ruined but it is very much in question," Mr. Wamp said. "He's got to quit shooting himself and us in the foot and the head." Mr. Wamp described the situation between Mr. Trump and his fellow Republicans as a "full-scale food fight."

Republicans in Washington were baffled and dismayed by Mr. Trump's performance in Arizona on Tuesday. The speech was "a perfect opportunity to lay out his fall agenda and instead he spent the time attacking the media, attacking members of his own party and pointing fingers," said Brian Walsh, a former senior official at the National Republican Senatorial Committee.

"It's a really bizarre political strategy," he continued. "You have a President who's at war with his own party and that's before you even get to the fact that you're going to have to compromise with Democrats on funding bills."

At the Tuesday rally, Mr. Trump castigated Arizona senators John McCain and Jeff Flake, both of whom have been critical of the President. On Wednesday, Mr. Trump wrote on Twitter that Mr. Flake, who is up for re-election next year, was "weak" on crime and immigration.

Political strategists and former White House officials said it was unprecedented for a president to castigate members of his own party in personal terms in public. While there is always tension behind the scenes, they said, it almost never spills into full view. "You want to preserve the relationship and a level of trust," said Matt Mackowiak, a Republican consultant. Mr. Trump "just doesn't seem to have the ability to do these things privately."

Republicans also expressed consternation at Mr. Trump's threat on Tuesday to "close down" the government in order to secure funding for a wall on the border with Mexico. The person who suggests a shutdown will likely assume responsibility for it, strategists said. Mr. Trump is mistaken if he believes that voters will blame Democrats "for a government shutdown over a wall that he said Mexico would pay for," Mr. Walsh noted.

With his brash and no-holds-barred style, Mr. Trump could not be more different from Mr. McConnell, a calculating tactician who prefers to speak as little as possible. On Tuesday, The New York Times reported the two men have not spoken since Aug. 9, when a telephone call descended into a "profane shouting match" of mutual recrimination. A former senior congressional staffer who knows Mr. McConnell and who spoke on condition of anonymity said the detail was striking: In all his meetings with the senator, he never heard Mr. McConnell raise his voice.

On Wednesday, the White House released a statement saying Mr. Trump and Mr. McConnell "remain united on many shared priorities." Mr. McConnell said the two men are in regular contact on common goals.

Meanwhile, Mr. Trump's deep unpopularity among Democrats makes that party's leadership unwilling to give the President any victories. "There's no political incentive for any [Democrats] to work with him," said Chris Lu, a former Obama administration official.

Mr. Lu added the window for Mr. Trump to notch significant legislative progress is rapidly closing. By late spring of next year, members of Congress will be in full re-election mode ahead of the midterm polls in November, rendering deal-making difficult.

Republicans expressed both resignation and frustration at the aspects of Mr. Trump's personality on display in Tuesday's speech. "He cannot walk away from a fight, no matter how small or petty it is," said a former Bush administration official, who spoke on condition of anonymity. "And he has made it very clear that no one is safe, whether you're part of his party, his team or his cabinet."

Mr. Wamp, the former Republican member of Congress, expressed hope Mr. Trump could "pull the wagon out of the ditch" if he exercises discipline, stays on message and moves his policy agenda forward. But he acknowledged that prospect now appears unlikely. Mr. Trump is "not giving us any reason to be optimistic."

Globe editorial: Why a weakened Trump is replaying his greatest hits 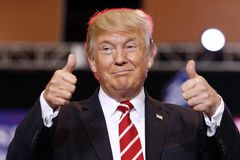 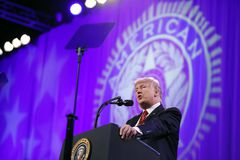