The sky was still dark when Suzanne Avery and her son Aaron approached the U.S. Capitol, its white dome illuminated like a beacon. They had woken at 3 a.m., catching the first subway train at their station. They arrived at the inauguration venue well before the security checkpoints had even opened. "That's called love of country," said Ms. Avery, 63. "And love of the new President."

In the cold predawn air, they stood for hours waiting to see Donald Trump sworn in as the 45th President of the United States. Ms. Avery, a farmer and horse breeder from Westmoreland, Kan., had never visited Washington, let alone seen a presidential inauguration. But Mr. Trump had inspired her to make the trip. "He got to your heart," she said. "He had true grit."

On Friday, Washington was the site of celebration and protest as power in the American capital shifted from one president to the next. Mr. Trump's supporters revelled in their long-awaited moment of triumph and Mr. Trump paraded down Pennsylvania Avenue with his family to his new home in the White House.

At the same time, thousands of protesters signalled their determined opposition to Mr. Trump's presidency. While many of the demonstrations were peaceful, some turned violent, bringing a level of unrest not seen in over a decade to a presidential inauguration. More than 200 people were arrested for rioting and city police in riot gear blocked streets in the downtown core.

As the sky behind the Capitol began to lighten Friday morning, Larry Miles, a businessman from Belle Isle, Fla., had already been awake and waiting for hours. The fatigue was worth it, he said: "We'll sleep better tonight when Mr. Trump is president."

Former president Barack Obama is a "good man," but he divided the country, asserted Mr. Miles, 46. "We've tried to put our arms around the world and when you do that, sometimes you get pushed over," he continued. Mr. Trump is "a strong leader who will have the respect of people."

Aaron Avery, 28, was standing nearby and said he was looking forward to "America being America again." He predicted that Mr. Trump's own ego would compel him to produce good results. Mr. Trump is "not going to let his name go down as a bad president," said Mr. Avery. "He's going to want a monument next to Lincoln's."

Hundreds of thousands of people gathered on the National Mall for the chance to witness Mr. Trump's inauguration, a notably smaller number than for Mr. Obama's first swearing-in, which attracted nearly two million.

As the dignitaries arrived on the viewing platform, chants broke out among the crowds impatient for the arrival of their chosen leader. They shouted "Trump! Trump! Trump!"; "USA! USA!" and "Lock her up! Lock her up!" (The "her" is Hillary Clinton, Mr. Trump's rival for the presidency, who was seated on the ceremonial platform together with her husband, former president Bill Clinton.)

At the conclusion of the ceremony, Debora Avgerinos of Indianapolis, Ind., and her friend Bonnie Beedle of Tulsa, Okla., shone with happiness. "Thank God he's at the helm," said Ms. Avgerinos, 63. "Things have to change in America and he's the man to do it." The two women picked their way through the crowds to reach the exits. Next on their agenda: a parade-watching party. In the evening, they planned to attend the "Faith, Freedom and Future" inaugural ball at a hotel near Capitol Hill.

In the streets nearby, protesters were easy to spot. Some carried signs while others deployed more creative methods to oppose Mr. Trump. Two brothers from Maryland, for example, dressed up as Mr. Trump and Russian President Vladimir Putin, with their Mr. Putin holding a chain looped around their Mr. Trump's neck.

"The best way to reach people who disagree with you is humour," said Jacob Shiman, 21, who was disguised as Mr. Putin. Even Mr. Trump's supporters couldn't resist the tableau the brothers had created. "This is classic," said John McGlasson, 53, a Trump voter from Los Angeles, who asked to take a picture with them. "It's a big country, why not? I love that these guys can come out and do this."

Several times, police squared off against protesters who had damaged vehicles, destroyed property, thrown rocks and set small fires. The storefront windows of several businesses, including a Starbucks and a McDonald's, were smashed by anti-capitalist protesters wearing black. The officers used crowd-control measures, including a chemical spray, to push back the protesters. Six officers suffered minor injuries, the Washington police chief said.

But the protests did little to dim the ebullience of Mr. Trump's fans. "We've just had a revolution," enthused Mr. McGlasson, the Trump supporter from California. "Nothing is going to change except everything." 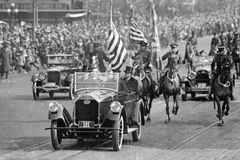 A road trip through the Donald Trump heartland 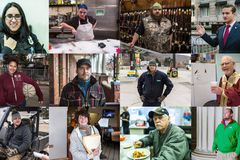 Donald Trump uses inaugural address to outline ‘America first’ vision
Follow Joanna Slater on Twitter @jslaternyc
Report an error Editorial code of conduct
Due to technical reasons, we have temporarily removed commenting from our articles. We hope to have this fixed soon. Thank you for your patience. If you are looking to give feedback on our new site, please send it along to feedback@globeandmail.com. If you want to write a letter to the editor, please forward to letters@globeandmail.com.
Comments