We thought we were immune. So did the residents of Nice, London, Barcelona and Berlin. As of Saturday, Edmonton now joins the dubious list of cities in which vehicles have been used as instruments of terror against civilians and officers.

Yet as security expert Phil Gurski has observed, recent court decisions point to a growing presence of Islamic State ideology on Canadian soil. In the past week alone, a Quebec man was sentenced to nine years in prison for attempting to join Islamic State. And a former University of Manitoba student was convicted of providing material support to al-Qaeda; his two Canadian accomplices have disappeared and are presumed dead. In addition, within the past year, police killed would-be suicide bomber Aaron Driver in Ontario, while IS-devotee Rehab Dughmosh awaits trial for attacking Canadian Tire patrons with a knife and a golf club in June. And let's not forget that there have been about 100 Canadians who have left to join IS, with a subset seeking to return.

It is clear that Islamic State advocates pure hatred against anyone who does not ascribe to its ideology. This includes most Muslims worldwide. The group has even put out a "hit list" of Muslim leaders in Canada and the U.S., whom the group deems as traitors. Their goal is clear: maim or kill as many as possible, thereby spreading division and hatred within societies.

Opinion: Solidarity is the best response in the face of terror attacks

We must not let them succeed.

In the coming days, political leadership will be key for uniting citizens, while setting a tone of defiant resilience. Grassroots initiatives will be important for strengthening our social fabric, based on our bonds of common humanity. Let us join vigils, pray together and offer compassionate solidarity with the victims. We are stronger together. And let us remain vigilant against those who exploit this attack to spread hatred against Muslims. This is the vicious cycle that Islamic State aims to put into motion.

We can also learn from the response of other countries where such attacks have occurred. Across the pond, "keep calm and carry on" is exemplary, for it teaches us not to give in to our fears, nor to the goals of those who seek to divide us. In Barcelona, half a million people marched in a peace rally under the banner "I am not afraid," echoing the London message. Muslims were prominent in the rally, with condemnation while reclaiming their faith, emphasizing "Not in my name." There was also important messaging against xenophobia in the forms of signs reading "No to Islamophobia."

A recent study by West Point's Combating Terrorism Center on radicalization in Spain between 2013-2016, indicates that in 87 per cent of arrests, a radicalizing agent was key. In 69 per cent of arrests, strong social bonds were present amongst detainees. Taken together, the study advises the use of law enforcement to focus programs on where both sets of conditions exist. It also suggests that this model is applicable in other jurisdictions beset with radicalization and violent extremism. Muslim institutions must continue to thoroughly vet new imams, activists and guest speakers for all forms of hate speech and jihad recruitment. It seems to be working here: In many instances, Canadian Muslims have been the first to alert authorities of suspicious behaviour.

In the long term, even if IS is militarily defeated, its destructive ideology must be dealt with. There is a battle under way between a regressive, violent worldview and a pluralistic vision based on respect for individual human dignity. This implies confrontation with strains of Islamic traditions antithetical to the modern world.

As a minority, Canadian Muslims should continue to do the right thing by taking ownership of their civic responsibility, chart an expansive Islamic identity that is wholly Canadian and stand as one with all Canadians against every form of hate. Together, we must resolve to ensure the spectacular failure of violent extremism.

Opinion
Solidarity is the best response in the face of terror attacks
October 1, 2017 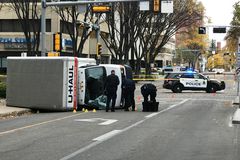 Follow us on Twitter @globedebate Opens in a new window
Report an error Editorial code of conduct
Due to technical reasons, we have temporarily removed commenting from our articles. We hope to have this fixed soon. Thank you for your patience. If you are looking to give feedback on our new site, please send it along to feedback@globeandmail.com. If you want to write a letter to the editor, please forward to letters@globeandmail.com.
Comments are closed