Dr. Charles Tator is professor of Neurosurgery at the University of Toronto, senior scientist and director of the Canadian Concussion Centre, Krembil Neuroscience Program, Toronto Western Hospital, and board member, Parachute Canada.

Four years ago, I was asked by the British Journal of Sports Medicine to write an analysis report on the topic of chronic traumatic encephalopathy or CTE, which is a specific type of brain degeneration recognized in athletes and others who have sustained multiple concussions. This is a serious type of brain degeneration for which there is no known treatment. It causes a major decline in neurological function, including mental disorders such as depression and impulsiveness and a severe form of dementia, usually many years after the last concussion.

To write the analysis, I reviewed the literature and our own evidence that we had generated at the Canadian Concussion Centre at the Toronto Western Hospital over the previous five years since we had begun studying CTE. My report, published in the Journal, was titled: Chronic traumatic encephalopathy: How serious a sports problem is it? It was difficult then to be accurate because we had studied only six brains of retired, deceased Canadian Football League players, and only half showed CTE.

Our findings were somewhat different from the findings of Ann McKee and colleagues at Boston University, who were aggressively recruiting brain donations from retired professional athletes and their families. Their program received funding and support from several sources. On July 25, Dr. McKee's Boston University group published their large series of cases of CTE in The Journal of the American Medical Association. They reported their experience with 202 brains from former football players, the largest series of CTE suspect cases ever reported. They found that an astounding 110 of the 111 (99 per cent) of the donated brains of former National Football League players showed CTE.

Thus, this study represents a substantial increase in the strength of the evidence required to answer the question I posed four years ago about how serious a problem is CTE in sports? It is highly likely that CTE from repetitive concussions is a serious problem, indeed, in U.S. football. To be sure, the NFL acknowledged this when it settled the lawsuit of the damaged players for $1-billion (U.S.) and began supporting research efforts on concussion and CTE, mainly in the United States. However, it is not certain that U.S. football can be saved.

What about Canadian football? Was our figure of 50 per cent an underestimate, perhaps due to our small sample size of six cases? The Boston University group also reported that eight of nine (88 per cent) former CFL players whose brains were donated to the study had CTE. Thus, the Canadian game may be as damaging to the brain as the U.S. game. Up until now we thought that perhaps because Canadian football is played on a larger field than in the United States it would be safer. Clearly, more experience will have to be accumulated. Our Toronto Western Canadian Concussion Centre research team has stated that we need to examine 50 donated brains to be certain about the incidence of CTE in former CFL players. We now have more than 30 brains under examination. It is vital to continue this research. We need to be able to provide answers to the moms and dads who are uncertain about whether to sign up their kids for collision sports like football. We still feel that Canadian football can be saved.

What about other sports? In our brain bank at the Canadian Concussion Centre, we have also received brain donations of athletes who sustained multiple concussions in other sports, including hockey. We have already publicly announced that Steve Montador, a retired National Hockey League player who died at 35 after several seasons in the NHL, had CTE. Therefore, it appears that hockey also has a serious problem, and the class-action lawsuit initiated by many former NHLers is gaining momentum.

Many moms and dads are asking: Should we sign up our boys and girls? Can hockey be saved? I think that hockey can be saved, but it is going to take a lot of effort on the part of governments and leagues to improve hockey safety. Parachute Canada, our national injury prevention agency, is engaged in this battle and has a website containing excellent material about concussions, and descriptions of its many useful programs to save our games.

Opinion
CTE and violent sports: It's time to rethink our approach
Studying CTE and its effect on former CFL players could pave way for safer future
A chance for the NHL and NFL to get it right on concussions 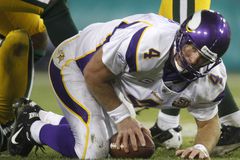