It's déjà vu all over again for the no-fly zone debate.

The United Nations, NATO, the African Union, the European Union and the Arab League are all contemplating a no-fly zone over Libya in a bid to eliminate Moammar Gadhafi's ability to use his air resources against opposition forces. There's much discussion about the wisdom of such a move, the main argument against it being it would be essential to first destroy Libya's airfields, anti-aircraft missile/gun locations, radar and command-and-control centres.

But that argument is merely a stalling tactic for political leaders, because having to take such action before patrolling Libyan airspace would be equivalent to telling a Canadian infantry company in Afghanistan that it wouldn't be ordered to attack a hill until it was confirmed that the Taliban defenders had been killed by artillery fire. Considering the state of Colonel Gadhafi's air force and air-defence system, the imposition of a no-fly zone would be a low-risk undertaking.

The proverbial elephant in the room is a much more serious hurdle: mission creep. Too many references are made to the successful 12-year no-fly zone maintained over Saddam Hussein's Iraq after the 1991 Persian Gulf war, suggesting the same result could be achieved over Libya. But that zone was established after the war had been won by the U.S.-led coalition and was limited to keeping Iraqi aircraft out of the sky. (Unfortunately, due to an oversight, restrictions on Iraqi helicopters weren't included.)

A much better comparison could be made with the inaccurately labelled no-fly zone imposed by NATO over Serbia during Kosovo's attempt to break away in 1999. Inaccurate, because the intervention went well beyond closing the airspace over Serbia to all but NATO aircraft. It started with the targeting of Serbia's air defences but quickly escalated to an all-out bombing campaign - initially against military and security targets, then adding strategic targets such as oil refineries and major bridges.

NATO made daily claims that civilian targets weren't included. But I visited a number of apartment buildings that had been destroyed (along with many of their occupants), none of which were within 50 kilometres of a military or strategic target. Was this the intent during the opening stages of the bombing campaign? I certainly hope not. But once you decide to militarily intervene in another country's civil conflict, you have to be prepared to escalate even if it's the wrong thing to do, because quitting your commitment when the initial plan fails is just not on.

Odds are, the same scenario would unfold in Libya if a no-fly zone were enforced. Unfortunately, Col. Gadhafi doesn't need his air force to prevail, so its grounding or destruction would merely shift the fighting to the backs of his army. Libya is a big country, with 2,000 kilometres of coastline, so the major fighting would take place along the main coastal road. The opposition forces would be no match for even poorly organized army units if Col. Gadhafi decides to get serious.

Watching this unfold from 20,000 feet, the countries enforcing any no-fly zone would be unable to ignore the carnage below them. Backed into a corner, their political leaders would be forced to escalate and authorize attacks against the Libyan army - thereby becoming, in effect, the opposition's air force. By so doing, they would assume a much larger role in Libya's future, including reconstruction of the damage they inflicted.

Don't get me wrong, I'm no fan of Col. Gadhafi. But I'm also no fan of political decisions driven by well-meaning military undertakings with the naive belief they will be short term and successful. As the saying goes, "In for a penny, in for a pound." 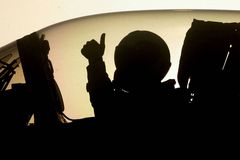