Paul Evans is a professor in the School of Public Policy and Global Affairs and Xiaojun Li an assistant professor in the Department of Political Science at the University of British Columbia.

The 19th Party Congress that just concluded in Beijing has made things a whole lot more interesting for the government of Prime Minister Justin Trudeau in charting the next steps in its China policy.

This is now unmistakably Xi Jinping's China. His 'thought' has been elevated to sacred status, and his power more centralized than under even Deng Xiaoping. The Party is in command, and Mr. Xi is in command of a party that is likely to be even more repressive and more resistant to Western influences, at least in the short run.

Barack Obama famously talked of many paths to one democratic destination. Mr. Xi's China is on a different path to a different destination defined as "new-era socialism with Chinese characteristics." Its peaceful rise is morphing into China as an emerging great power exerting regional and global influence with a distinctive model of development and the military and diplomatic power to defend its core interests.

Results from a comprehensive survey of Canadian views of China conducted a few weeks before the Party Congress indicate that Canadians are not in love with China. Feelings about China overall are cool, and ice-cold when it comes to its political system and human-rights record. We are worried about Beijing's increasing military capabilities, its assertive behaviour in maritime and territorial disputes with its neighbours, and elements of its growing presence and impact inside Canada.

The flip-side is a pragmatism about dealing and partnering with China. Support for a free-trade agreement with China is just shy of 70 per cent. We rank increasing economic and commercial relations and collaborating with China to address global issues, including climate change and anti-terrorism, as more important than promoting human rights in China.

Human rights and democracy remain major concerns, but they are perceived as a lower priority than protecting Canadian values and institutions at home. They are best advanced, not by public shaming and sanctions, but by increasing trade and holding China to rules and agreements. This is not trade or human rights; it's human rights, where possible, through trade.

This pragmatism has three foundations. The first is a belief that China presents a rising economic opportunity. The second is a fear of protectionism in Donald Trump's America First trade policies. And the third is an even deeper fear that the United States is pulling away from the world order that it has anchored and inspired for 70 years. When a majority of Canadians name China over the United States as more responsible and predictable in maintaining peace and security and as a more responsible international leader on issues like climate change and environment in the next decade, it's clear that a major shift in global power and perceptions is in motion.

All of this gives the Trudeau government considerable latitude to deepen connections with China. On trade, the issue is not whether to pursue deeper economic connections with China but how to do it. The debate can shift to the precise instruments – comprehensive or sectoral, free trade or a series of partnership agreements that extend outward to include investment, education, and environmental protection. And to how we get the best terms, with eyes wide open.

There are many areas for collaboration – environment and climate change, counter-terrorism, and a next generation of peace-support operations chief among them.

The hardest challenge is to better understand and address the apprehension at home about a deeper embrace of China. Some of this centres on reservations about Chinese investments in Canada that we found to be strong but subject to revision when common misunderstandings of their size and impact are dispelled. Other anxieties about threats to Canadian values and institutions and the Canadian way of life are more amorphous but strongly felt. This will require vigilance and a judicious ability to separate influence from undue interference.

Dealing with Mr. Xi's China is going to be more difficult as it becomes more important. Canadian opinion is showing a strong strand of pragmatism favouring working with China as we must and partnering as we can, born out of a profound worry about our neighbour to the south and an unravelling global order.

With no heir-apparent, China opens way to long-term reign for Xi
October 25, 2017 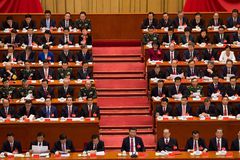