Architect Dimitri Papatheodorou ventured into the modern lobbies and through the marble corridors of many of the luxury condo buildings in downtown Toronto as he guided his client on the search for a new address.

The two were not expecting to find it in an icon of the 1980s. Then they found themselves at Avenue Road and Bloor, in a suite at the Renaissance Plaza, admiring the view and marvelling at the retro interior.

"When we walked in, it was 1983," recalls the client, who asked that his name not be used because of his work as a criminal defence lawyer.

Looking past the white melamine kitchen, dark brown trim and boxed-in rooms, the client and architect both saw potential on an upper floor of the 26-storey concrete building that was new and alluring when Hollywood stars and Bay Street titans were frequently spotted at Prego della Piazza in the plaza below.

The building was designed in the Brutalist style by the prominent architectural firm Page + Steele. It resembles another eighties landmark – the old Four Seasons Hotel just to the north.

The unit for sale offered a generous amount of space and a sunset view overlooking the Royal Ontario Museum and the University of Toronto.

The client, who practises at a Bay Street law firm, had already toured what he calls the new "glamour buildings" such as the TIFF Bell Lightbox and the Thompson hotel. But he wanted more space than those new units typically offered for the money.

"Most of the newer construction is really small. It just didn't make sense."

The nearby Bellair and Prince Arthur had some attractive units but the lawyer listened to Mr. Papatheodorou, who saw the opportunity at the Renaissance Plaza to start with a tabula rasa. Since the old, enclosed lay-out had little worth saving, the client wouldn't be paying for a previous owner's renovations.

Mr. Papatheodorou, who teaches architecture at Ryerson University, had plenty of experience with commercial and residential projects. During his years at Toronto-based HCA Architecture Inc., he designed the Stillwater Spa directly across from the Renaissance Plaza.

The lawyer had consulted Mr. Papatheodorou for some design advice at a house he once owned, so he knew the two worked well together. He particularly liked Mr. Papatheodorou's calm demeanour – which seemed the perfect foil to the lawyer's more driving disposition.

The lawyer purchased the unit and the two began planning to demolish and rebuild.

"We just ripped it out completely – it was a shell," says the lawyer.

They both envisioned a very modern residence that would become a haven but also a welcoming setting for gatherings.

For the new layout, Mr. Papatheodorou divided the space into two. Eating, relaxing and entertaining takes place in the open living and dining areas next to the large windows overlooking Avenue Road. The large master bedroom also faces west. The private areas, which include the expansive master bathroom and the lawyer's home office, are set back from the windows.

A passage running the length of the suite divides the two areas.

Throughout, Mr. Papatheodorou used translucent glass as a theme and organizing element.

At first, the lawyer wasn't sure he wanted any separation between the living areas.

"I was a little resistant to the glass," he recalls. "Why would you want to close it off?"

But Mr. Papatheodorou persuaded him that the glass creates a residence that seems open, light and airy during the day but more sheltered after dark. The glass acts as a screen between the kitchen from the entrance, for example. The sun's rays can reach the luxurious soaker tub during the day but at night the space becomes a private retreat.

It's also well-suited to a residence designed for adults, he adds.

"There's a certain amount of mystery and suspense with glass," says Mr. Papatheodorou. "It's always changing. It's not just a flat wall."

Part of the modernity comes from the simple palette, says Mr. Papatheodorou. The walls throughout are white. The kitchen features built-in appliances and high-gloss white cabinets. With so much sheen, Mr. Papatheodorou suggested floors made of wide boards of oak stained a dark brown.

"It was pretty obvious we wanted something flat and warm. There are so many choices with a hardwood floor. We wanted them to be dark because everything else is light."

Italian porcelain tile in a deep grey was used in the bathroom. Bleached oak bookshelves in the home office also add texture and warmth.

The finished condo, says the lawyer, is "ultra, ultra modern and masculine." In the event he ever decides to sell, he figures he'll get a better return on his investment than if he had purchased a newly built unit in the same neighbourhood.

"If you have the strength and the vision to renovate, it's really good value for Yorkville," he says.

The lawyer mentions strength because he found the process a tough slog at times. Looking back, he thinks he was more hands-on with the trades than he needed to be. Mr. Papatheodorou says his client spent a fair amount of time on the phone with the builders.

"I would get worried about the details," admits the lawyer.

He wondered, for example, if raising the floor in the bathroom to accommodate new gear would still leave enough head room in the shower.

Mr. Papatheodorou reassured his client that the architects had thought through all of the details.

"I think you were part therapist to me," the client says now, as he takes in the completed space.

Mr. Papatheodorou says it's a role he doesn't mind. It's one reason why he likes doing residential architecture along with the commercial projects. Homeowners are creating a legacy, in many ways, and that makes the work more engaging and interesting.

"I actually love seeing what makes people tick," says Mr. Papatheodorou. "The corporate stuff is pretty cold. It's not their money."

Homeowners are typically investing a substantial amount of money in their renovations, he points out.

The lawyer has found other advantages to living in an older building: He likes the quiet elegance of the lobby and common areas and the fact that some of the staff he sees every day have been there for 20 years or so.

He walks to and from work in just a few minutes. When he returns home at night, he feels rejuvenated by his new surroundings.

"I just wanted a place that I could really enjoy – a sanctuary," he says. "I really do sit back and look at the sunset."

Home of the Week: A private space, smack-dab in downtown Toronto
May 10, 2018 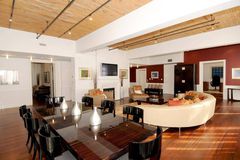 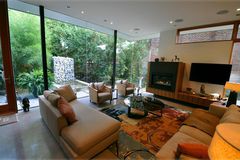 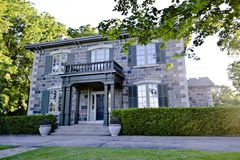 Follow Carolyn Ireland on Twitter @CarolynIreland
Report an error Editorial code of conduct
Due to technical reasons, we have temporarily removed commenting from our articles. We hope to have this fixed soon. Thank you for your patience. If you are looking to give feedback on our new site, please send it along to feedback@globeandmail.com. If you want to write a letter to the editor, please forward to letters@globeandmail.com.
Comments