On Dec. 17, 2010 a young Tunisian street vendor named Mohamed Bouazizi, the victim of eternal police and government harassment, doused himself in gasoline and set himself on fire. The self-immolation triggered protests that quickly spread across the country. Suddenly the Tunisian revolution – and the Arab Spring – were in motion.

An ocean away, in Washington, Mustapha Kamel Nabli, a Tunisian-born senior World Bank economist, found himself gripped by the uprising, though it was still too early to predict it would end the career of president Zine el Abidine Ben Ali, the Tunisian dictator who had once employed him.

Mr. Nabli was at a World Bank conference in Bogota, Colombia, on Jan. 14, 2011, when he learned that Mr. Ben Ali and his family that very day had packed their planes with treasure and fled to Saudi Arabia. "I became very restless," he says. "So I told my wife that we are going to leave tomorrow for Tunisia. It was important for me to see what was going on."

The next day he and his wife, Fatiha, were back in Washington, getting ready for their overseas flight. He says: "On the 15th, in the evening, I was packing and I got a phone call from the Prime Minister, who said 'I would like you to come back and do what you can.' I said I would be happy to contribute. I didn't hesitate for a second."

Only two days later, Mr. Nabli was the new Governor of Tunisia's central bank, making him the first truly independent central bank governor of an Arab Spring country, a status unchanged today as Libya and Egypt struggle to form stable democratic governments and Syria moves ever closer to civil war.

At the time, Tunisia was in political and economic chaos. The man who begged him return to Tunisia, Mohamed Ghannouchi, was prime minister on Jan. 14th, president for a few hours on the 15th, then prime minister again until he was replaced a month later. The rising body count – about 300 Tunisians were killed in the uprising – had sent the economy to the brink of destruction. Investors had fled, shops closed, tourists disappeared and Tunisians, fearing financial mayhem, had yanked funds from the banks.

It was up to Mr. Nabli and a few other prominent Tunisians living abroad to return home to help douse the political and economic flames. They abandoned high-paying careers, taking top jobs at the central bank and the finance, commerce and tourism departments, among others. "All of them deserve a lot of credit," says an ambassador in Tunis who did not want to be identified. "They did it out of a sense of national duty. They were driven by a desire not to see their country collapse so it could get to October's democratic elections."

It is 11:30 in the morning and we are on the seventh floor of the modern headquarters of the Banque Centrale de Tunisie – French is spoken by virtually everyone in this former French colony – just beyond Tunis's old centre. It is too early for lunch so Asma Ghribi, a young Tunisian journalist whom I hired to set up interviews and interpret Arabic, and I arrive with a box of delicate little cakes.

Finding them was quite an adventure. Ms. Ghribi and I plied the streets around the central bank before the interview and found no suitable patisserie. In near panic as our appointment approached, we hailed a taxi driver to take us to a traditional patisserie famed for its baking, then sped back to the bank. When we placed the cake box on his office table, Mr. Nabli gave it a curious look, then devoted his attention to us.

Mr. Nabli looks the part. He is 64, fairly tall by Tunisian standards, has thinning grey and white hair and is dressed in a conservative blue suit. He speaks English (and French and Arabic) softly and simply – there is no annoying economist jargon. He and his wife are happy to be "home" after 14 years in Washington, where he was regional chief economist within the World Bank's MENA (Middle East and North Africa) group.

Mr. Nabli was born in the southern Tunisian coastal town of Teboulba in 1948, the son of peasant landowners who, thanks to government support, were able to send their son to school. He studied some economics in secondary school and yearned to be a writer ("I turned out to be a very bad writer"). After attending the University of Tunis, he went to the University of California, at Los Angeles, where he earned Master's and PhD degrees in economics.

Shortly thereafter, he became chairman of the Tunis Stock Exchange. Between 1990 and 1995, he served as minister of economic development and minister of planning and regional development in the Ben Ali government. The two men have not talked since then, which is a good thing for Mr. Nabli's image, given the hatred for the dictator whose piracy nearly bled the country white. Mr. Nabli says he quit "because it became clear to me that the regime was going in the wrong direction in terms of corruption, increasing nepotism, and authoritarian attitudes and repression."

When Mr. Nabli started his central bank job three days after Mr. Ben Ali's exodus, the political revolution seemed on the verge of being upstaged by financial and economic collapse. He swung into action. "The country was in turmoil," he says. "The first few days were violent. The big challenge for a central bank was to ensure the payments system continued to work."

The banks were pumped full of liquidity and paper money to meet a sudden demand to convert deposits into cash. The central bank made sure the international payment system kept functioning. Maintaining the Tunisian dinar's existing ties to the euro, dollar and yen prevented the currency from imploding. Mr. Nabli's nightmare scenario – a run on the banks – never happened. "If we had had a run on the banks, we would have had a real, real problem," he says.

By the spring, the financial system was pretty much intact. The next job? Rebuilding the central bank itself.

When Mr. Nabli arrived, the computer systems were primitive and Internet and e-mail was restricted. "Use of e-mail was not generalized," he says. "I used to get tons of daily reports on paper."

The language of international finance and economics – English – had to be taught to the bank's senior employees. Experts in bank supervision and reserves and currency management had to be hired. Above all, Mr. Nabli had to ensure that the bank's independence was preserved.

He has fought off two challenges to his professional freedom from the Islamist government of Prime Minister Hamadi Jebali. The first came last October, when the new government (read: the Prime Minister) wanted sole power in appointing the central bank governor. The proposal triggered a national debate, which went in Mr. Nabli's favour. Now the governor can only be hired, or fired, with the approval of the government, the president (head of state) and the national assembly.

The second challenge came in early April, when the government tried to give itself a role in the monetary policy game. Mr. Nabli explained to the politicians that the central bank is better equipped to deal with managing inflation and the cost of money. He appears to have won the debate.

Central bank independence, he argued, is the key to building confidence in Tunisia's democracy and the economy. To illustrate his point, he tells the story of how Mr. Ben Ali hijacked bank supervision to enrich himself and his extended family, which includes his brother in law Belhassen Trabelsi, now holed up in Montreal, who was convicted in absentia by a Tunisian court of plundering the state treasury.

Mr. Ben Ali stuffed the central bank and the public and private banks with friends, all the better to channel favourable loans to family ventures. "What it meant for Ben Ali and the family was that it gave them easier access to credit, to get loans from banks, to get preferential treatment," Mr. Nabli says. "By the end of 2010, there was 3-billion dinars [$2-billion Canadian]of debt owed by the family to the banking system. The amount had doubled every year between 2008 and 2010."

About an hour after we started, Mr. Nabli sends for plates and cutlery for the cakes. We wait and wait; evidently such items are in short supply on the Governor's floor. Finally, we all get up to leave – everyone is late for their next appointment. As he eyes the untouched sweets, Mr. Nabli laughs. "I've never been presented with gifts from journalists before," he says.

Graduated with Master's and PhD degrees in economics from the University of California, Los Angeles.

Spent 14 years, until 2011, in Washington as the World Bank's chief economist for the Middle East and North Africa.

Wife Fatiha is Tunisian. They have no children.

He and Fatiha are happy to be out of Washington: "The big problem in Washington was that it was cosmopolitan. There is a lot of turnover. You're losing friends all the time and it becomes tiring."

"I am an avid reader of books, especially history and science."

Bombardier's Chet Fuller: From landing airplanes to landing orders
May 8, 2018 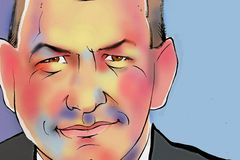 Deepak Chopra: A seismic shift from paper to pixels
May 8, 2018 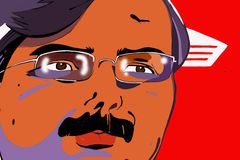 Dawn Farrell: No bluster, no ego, just candour in a power-hungry world
May 8, 2018 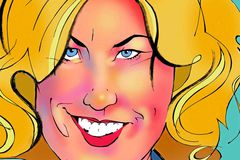