QE, as it is called, has been the signature policy of the world's most powerful central banks – those in the United States, European Union, Britain and Japan – since the 2008 financial crisis. The idea was to print tsunamis of money to push down borrowing costs and push up asset prices, boosting the wealth effect and preventing economies from spiralling into outright deflation.

All good things must end, and so it is with QE. Its withdrawal, especially among the countries that share the euro, has to be done with delicacy and surgical precision, for fear that a cold-turkey approach will create a new crisis. But does the European Central Bank and its QE maestro-in-chief, Mario Draghi, have that option? His problem, and it's a big one, is that the ECB is running out of bonds to buy. Time is up. By all rights, QE should stop now, all the more so since euro-zone growth and core inflation are firming up. But it can't.

By now, we know that central banks are rather expert in creating new messes by trying to fix old ones. The 2008 crisis, the biggest financial botch job since the Great Depression, was in good part the result of hands-off banking regulation – thank you Ronald Reagan, Maggie Thatcher, Bill Clinton and George Bush – and years of market-warping low interest rates. So in came QE, then more and more QE. It turned into a monster and no one knows how to stuff it back into its cage.

QE worked, to a point. It probably did prevent the big economies from sinking into deeper recessions and probably did help revive growth; cheap money has its advantages. But in inflating the value of financial assets, from housing to equities, it made the rich richer, since the rich own most of the assets worth owning. Too bad for the rest of us.

It created bubbles that will inevitably pop at some point. The cheap money encouraged companies and consumers to take on lavish amounts of debt, creating a potential leverage crisis if rates return to normal levels and debt payments rise. Remember, when your mortgage goes from 2 per cent to 3 per cent, your debt-servicing costs climb by 50 per cent.

QE was a godsend to highly-indebted sovereign borrowers such as Italy, overseer of the world's third-biggest debt market. At the height of the European debt crisis, in 2011 and 2012, it looked like Italy was going to be the next bailout victim. But Mr. Draghi's promise to do "whatever it takes" to keep the euro zone intact, which would eventually include fire-fighting measures like QE, sent Italian sovereign bond yields plummeting. Italy, a no-growth, reform-allergic wonder for almost two decades, can now borrow 10-year money at 2 per cent; that's cheaper money than the U.S. Treasury can raise.

What happens when QE ends? The sluggish countries will have to offer far higher yields to attract investors. Hello Debt Crisis, Part Two? The Italians are nervous since they know that Italy is, in effect, an ECB protectorate, as is Portugal.

The ECB is in a pickle because its QE program, running at €60-billion ($88.1-billion) a month, has already vacuumed up more than €2-trillion of bonds since it was launched in 2015 and is bumping up against its limits. Those limits are defined by the "capital key," whereby the ECB buys bonds in proportion to the size of each country's economy. Also, purchases cannot exceed 33 per cent of the bonds' issues. Already, the ECB is close to hitting the bond purchase limits of Portugal, the Netherlands, Ireland, Finland and Spain, with Germany not far behind.

Running out of bonds could deny Mr. Draghi the slow, boring, barely perceptible QE wind-down that he obviously cherishes (as do the other central bankers). A rapid end to QE could be disastrous. Note the "taper tantrum" of 2013, when the U.S. Federal Reserve roiled the markets by merely mentioning asset purchases would have to end one day. Above all, Mr. Draghi has to make sure that pulling the plug on QE doesn't send the euro on a roller-coaster ride that would deliver low-grade nervous breakdowns to corporate finance chiefs and investment managers.

Donald Trump will make his end-QE mission even more complicated. If the U.S. President's tax reform package works, the dollar would probably soar and the ECB could wind down QE under the cover of the stronger buck. If the tax reform flops – and it could, given the President's dismal legislative record – the dollar might go into the tank, sending violent spasms through the equity and debt markets. Under that scenario, a gentle wind-down of QE would be impossible.

There is no easy way out for the QE program. But don't let this surprise you. It got too big too fast and went on too long, to the point where it became a crutch for sovereign issuers and a cocaine-style stimulant for big corporations and investors. QE solved one problem and caused another. There will be blood. 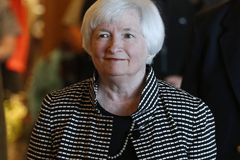 Euro zone inflation rises more than forecast ahead of ECB meeting
Follow Eric Reguly on Twitter @ereguly
Report an error Editorial code of conduct
Due to technical reasons, we have temporarily removed commenting from our articles. We hope to have this fixed soon. Thank you for your patience. If you are looking to give feedback on our new site, please send it along to feedback@globeandmail.com. If you want to write a letter to the editor, please forward to letters@globeandmail.com.
Comments