It's six days before the official opening, and Saks's president is touring the almost-finished Toronto store before Hudson's Bay Co., which bought Saks Inc. in late 2013, launches the first Saks Fifth Avenue in Canada on Thursday, raising the stakes in the country's increasingly crowded luxury fashion market. With construction workers still making last-minute adjustments, and boxes of merchandise, ladders, drills and cords scattered on the Italian marble floor, Mr. Metrick is gearing up for combat.

"Is there room for more luxury?" he asks, dressed in posh Saks attire, including an Italian grey wool Isaia suit ($5,000) and a pair of light brown Prada wing-tip shoes ($800). "I think there is. I think there's room to come in and take [market] share" from rivals.

Saks's arrival in Canada comes at a tenuous time. The economy is shaky and stock markets are volatile. Apparel retailers have been feeling the strains of currency fluctuations and rising competition from e-commerce and others, with a growing array of chains going under.

At the same time, the global fashion luxury market's growth is slowing, putting pressure on retailers just as more of them are entering this country.

U.S. upscale merchant Nordstrom Inc., which opened its first store in Canada in the fall of 2014, now has three here and will add two more this fall in Toronto and another next year. La Maison Simons is expanding from its nine-store Quebec base, where it is a local favourite, and will launch its third store outside of that province next month, with more to come.

Sporting Life, which is known for high-end "fashletics" (fashion and sporting goods,) will be rapidly branching out beyond its Ontario base to as many as 20 stores from six today. Meanwhile, Holt Renfrew & Co., the country's dominant luxury player, and Harry Rosen Inc., the largest in menswear, are investing heavily in their operations to prepare for the intensifying battle. Even the swish Hermès International SA is doubling the size of its flagship Toronto store.

"It's a challenging, competitive landscape that is evolving extremely rapidly," said Peter Simons, chief executive officer of Simons. "It's pushing everyone to rethink their business and to be aggressive. It's a very demanding time for a private Canadian company to survive."

In 2015, gains in the global luxury-fashion market slowed to just 1 per cent to 2 per cent, in constant exchange rates, from a 4-per-cent lift the previous year, according to recent data from consultancy Bain & Co. "The slowdown confirms a shift to a 'new normal' of lower sales in the personal luxury-goods market," the Bain Luxury Study says.

The slowdown is being felt even by the most chi-chi players. Hermès warned last week that its 2016 sales growth could slip, pointing to "economic, geopolitical and monetary uncertainties." Last month, Swiss luxury group Cie. Financière Richemont said its fourth-quarter sales fell 4 per cent, excluding currency fluctuations, squeezed especially by the fallout from November's Paris terror attacks.

With Saks and others coming to Canada, "the whole landscape is going to change in a huge way," added Susan McGibbon, president of Toronto consultancy the Retail Lab. "I think it's going to be a pretty fierce battle. It's probably one of the toughest times ever … Holt's and Harry's have had a pretty comfortable existence for a long time without much competition at all."

Even so, retailers can benefit from the small but growing band of well-off consumers in Canada, said Peter Miron, a vice-president at researcher Environics Analytics. The number of households with an income of more than $200,000 in 2016 grew just under five times faster than the Canadian average since 2013, according to Environics. And the number of households in the top earning bracket – over $250,000 – jumped 26.7 per cent since 2013, now accounting for nearly 3.7 per cent of households, up from 2.8 per cent in 2013, it found.

While Alberta is feeling the oil slump's shock waves, Toronto, Vancouver and Montreal "are humming along nicely at the moment," Mr. Miron said.

Nordstrom, which lowered its 2015 forecast in November, is meeting or exceeding its targets in Canada despite soft results at its U.S. stores, co-president Blake Nordstrom said. But the company also has felt some "markdown pressure" here after it had to clear out some goods at discounts, which pinches margins, as a result of not being familiar enough with local consumer demand, he said.

As well, Nordstrom has found that setting up logistics and buying systems in Canada "definitely is complex," he said. As a result, it is delaying for a second year – to 2018 – the launch of its fast-growing discount Rack stores here, he said. It will locate its first Rack at Bloor and Yonge Streets in Toronto, steps from the upmarket Mink Mile, in a new condominium building.

He wouldn't say when Nordstrom will start generating an operating profit in Canada. "No question that it's more difficult entering a new country – there are a lot of additional costs and effort."

Larry Rosen, CEO of Harry Rosen, which is investing $100-million to expand its stores, said the new Nordstrom outlets "have had no observable impact on our business trends" in the three markets where they opened. "We believe our strategy will ensure Saks will not impact us either."

While the privately held men's clothier has suffered declining sales in Alberta, its overall sales rose 6.2 per cent in 2015, down from its 9.1-per-cent gain the previous year, he said. He expects a "decent" 2016 and yet: "I'm cautious. I'm concerned. The economy is questionable right now."

David Russell, president of Sporting Life, which will open its first store in Calgary in the fall, added: "Competitors in the market are going to be feeling the pinch and are going to want to protect what they have."

Amid the uncertainty, the luxury landscape is changing as a growing number of young consumers shun elitist players, said Pamela Danziger, president of luxury market consultancy Unity Marketing in Stevens, Pa. Instead, consumers are looking for more experiences, such as going on trips or eating out. Saks is more elitist, while Nordstrom, with a wider range of lower priced goods, is more "inclusive," she said.

Saks needs a lift. In its third quarter, Saks Fifth Avenue's same-store sales fell 3.6 per cent, lagging the 2.8-per-cent increase at its sister discount Off 5th chain. In a tough economic climate, HBC lowered its sales outlook for 2015 and 2016 and is being conservative in its merchandise purchases, reducing inventory levels. It cited currency fluctuations that have dampened tourism in the United States and squeezed Saks's business. HBC's shares dropped to $14.98 last week, below the $17 of its initial public offering in late 2012.

Now, the spotlight is on Saks in Canada. The first store is in the same building as Toronto's downtown flagship Hudson's Bay, separated by a marble-floored hotel-like lobby. A second Saks launches a week later in Toronto's Sherway Gardens, and five more are planned in Canada.

Eyeing the bright and airy downtown Saks space, with a custom-made rain-drop-like chandelier hanging in the centre atrium, Mr. Metrick said it will stock full shelves even though the chain is lowering inventory levels over all. "You have one time to make the first impression," he said. It's a seeming reference to U.S. Target Corp.'s failed Canadian launch, which suffered from empty or scantly stocked shelves.

Mr. Metrick said despite overlapping brands between Saks and Holt's, many of Saks's fashion offerings are more "avant-garde" in its downtown store. It doesn't carry some mainstream beauty lines, such as Clinique, because they are next door at Hudson's Bay. But Saks is injecting personal-shopper services, including a suite with sofa and marble coffee table, where customers can sip champagne while being helped to pick products.

"The challenge for us," he said, "is just to make sure the customer feels that the money they're spending on this experience is worthwhile." 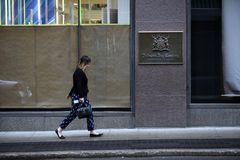 Nordstrom to open outlet store in Toronto in 2018