By any standard, the first season for the Toronto Arrows in Major League Rugby will be a success.

Despite being an expansion team, albeit one for a league in its second year of existence, the Arrows are in position to clinch a playoff spot in the final two weeks of the regular season, starting Sunday at Allan Lamport Stadium against the Glendale Raptors. If the Arrows win both games, they will clinch a playoff spot no matter what any of the other contenders does.

Plus, the simple fact of their establishment in Major League Rugby (MLR) as a Canadian professional rugby team now gives young players across the country hope to continue their development when they become adults.

However, Arrows back Dan Moor and the team’s vice-president and general manager Mark Winokur will tell you they are after a lot more.

“On the whole, for it to be an expansion year and fighting for the playoffs, objectively people would say it’s a decent outcome,” Moor, 28, said. “Knowing the guys on the squad we’re not satisfied with that. We want to compete for a championship because we think we have the team to.”

Winokur helped build the Arrows from an experimental venture last year to test the waters for pro rugby in Ontario into a team that sits one point out of the fourth and final MLR playoff spot with a 9-5 record. He said being the only Canadian outfit in a nine-team U.S.-based league provided a lot of motivation.

“We’re probably inwardly a little disappointed we’re still scrapping for a playoff berth rather than clinched,” he said. “We hope to put that right in the next couple of weeks. We’ve got a lot of talented guys and we think we’re vastly underrated. We’re sort of playing with a chip on our shoulder.”

It is easy to see why the Canadian team might feel overlooked. One has to go well down the news page on the MLR website to find any mention of the Arrows. The focus is mostly on U.S. teams.

“Yeah, we are the outlier, no question,” Winokur said. “[MLR is] happy to have us, but we are definitely the outlier. We are doing things a little differently than they are down there.”

Doing things differently means not taking advantage of league rules on foreign players in order to foster grassroots growth in Canada. Each MLR team can dress up to 10 foreign players a game on its 36-man roster. By choice, the Arrows are only carrying five so more Canadians can have roster spots.

The Arrows, which are owned by a consortium of individuals and corporations, were established in large part to develop the game in Canada by becoming a destination for elite young players, who until now could only aspire to playing professionally overseas, a long shot at best.

“We’re making a conscious effort to be a place for Canadians to play,” Winokur said.

There is another professional rugby team in Toronto. The Toronto Wolfpack also plays out of Lamport Stadium and it, too, has been a success. Now in its third season in the Rugby League, which is based in Britain, the Wolfpack has a 13-1 record and sits first in the second-tier Betfred Championship. The Wolfpack hopes to win promotion to the top-tier Super League after narrowly missing last year.

However, there are several differences between the teams. The first is the Wolfpack plays a version of the game called rugby league, which uses 13 players, while the Arrows are in the 15-player rugby-union version. Another is that because of complicated Rugby League roster rules, it is difficult for the Wolfpack to employ North American players. There are no Canadians on the team right now.

“This really was the missing piece in Canadian rugby,” Winokur said. “There wasn’t a pro franchise for all the kids who play at the high-school and university levels to go. But now we’re seeing huge interest from the youth groups coming down to the games. If you can imagine Toronto without a professional hockey team, what would all the kids who play it aspire to?”

Moor is a good example of how the Arrows are attracting Canadian players, even though the million-dollar contracts athletes get in other sports are a long way off. Salaries for the six months the team plays are between $18,000 and $26,000. But Moor, who holds an MBA from Oxford University and played professionally overseas, put a promising career on Bay Street on hold to play for the Arrows.

The way the Toronto native sees it, he still has a lot of time to get back into the private-equity business. The Arrows provide a unique opportunity to chase his sporting dreams and still learn a few things.

“I think you’ve got to follow your dreams in life,” Moor said. “It was a tough decision at the time because I was lucky enough to have a career with a decent trajectory at a young age. I just didn’t want to have any regrets when I was in my 50s. At the end of the day, I think a couple years of playing rugby professionally will only enhance my life experiences.

“I also think there are some great traits you can pick up in sports. For example, with the Arrows, I’m lucky enough to be one of the co-captains. I think it’s one of the best leadership experiences I’ve [had] in any realm of life, whether it’s business school, finance, you name it.”

Moor’s immediate goal is to make the Canadian team for this fall’s Rugby World Cup in Japan. After that, he will think about how much longer he wants to play. Either way, he is happy to be playing a role in carving a path for others in the game to follow.

“It’s a really exciting time in Canadian rugby,” Moor said. “Hopefully for some young kids in Ontario, they can dream about playing professional rugby and there’s that avenue for them.

“Even more broadly, I think rugby is just a fantastic game in terms of teaching lessons and skills that are valuable in life. If we can give the game a higher profile and get more participation and having people have those experiences, I think that is even more valuable than giving that pro experience to a handful of individuals.”

Toronto Arrows move up to third in the standings with late win over Utah Warriors
May 12, 2019 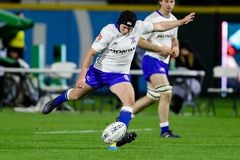 Toronto Arrows fight back for dramatic last-gasp win over San Diego Legion
May 5, 2019 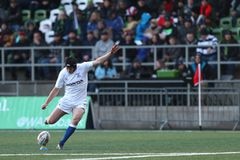 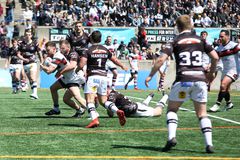