After weeks of refusing to say when the coronation might happen, the Toronto Blue Jays have finally ended the suspense that has kept local baseball fans on the edge of their seats.

Vladimir Guerrero Jr., the 20-year-old third baseman who is regarded as the top prospect in baseball, is finally getting the call to the big leagues.

After tearing it up in the minor leagues over the past couple of years, Guerrero will make his much-anticipated major-league debut on Friday at Rogers Centre when the Blue Jays begin a weekend series against the Oakland Athletics.

And just like that an early season series between two middling American League teams has turned into a must-see event for Blue Jays supporters clamouring for this moment.

Toronto manager Charlie Montoyo – almost sheepishly, given the tidal wave of attention Guerrero has received – confirmed after Toronto’s 4-0 loss to the San Francisco Giants on Wednesday that Guerrero was being called up from the Buffalo Bisons, the team’s Triple-A affiliate.

“Hopefully he becomes what everybody thinks he’s going to become. That’s going to be good for all of us – the City of Toronto, the Blue Jays, the organization.”

Earlier in the day, Guerrero swatted a home run for the Bisons against Syracuse, his third in eight games with the Triple-A outfit where he was playing his way into shape after suffering an oblique injury during Blue Jays spring training.

If anybody seemed ready for a promotion, it was Toronto’s hot prospect.

The expectations are already huge for the solidly built athlete who was born in Montreal but raised primarily in the Dominican Republic. He was an international signing of the Blue Jays as a 16-year-old in 2015 by then-general manager Alex Anthopoulos, for US$3.9-million.

Adding to his already impressive stature, he is the son of Vladimir Guerrero Sr., a nine-time all-star formerly with the Montreal Expos.

It just so happens that Guerrero Sr. had already been scheduled to be in Toronto this weekend to participate at a sports card signing expo, so now his trip to see his son to make his major-league debut is made that much easier.

Guerrero Jr. will be facing expectations, probably unfair given he has yet to prove his worth against big-league competition.

Montoyo was asked what advice he would try to offer Guerrero when he first meets with him.

“Just relax and play, just like I told him in spring training,” Montoyo said. “Do your best, and he will. He’s an easy kid to talk to.”

Clay Buchholz, the Blue Jays starter in Wednesday’s loss, was asked how the dynamic of the Blue Jays clubhouse will change with the addition of such a highly publicized prospect.

“I got to see a little bit of him when I was down there in Florida, he’s pretty special,” Buchholz said. “It’s fun to watch him in the box and I actually pitched to him a couple times and he definitely hit a hard ball off of me. I think it’s going to be good.

Buchholz said that if anybody can shoulder the attention it will be Guerrero, described as a big-hearted, easygoing sort.

“I think he expects to be great every time out, too,” Buchholz said. “Obviously the bar is set pretty high. What was he doing, hitting .400 in the minor leagues? Not everybody does that, you’re [a] pretty special individual when you just do that in the minor leagues. I think a lot of it is going to translate up here.

The Blue Jays could certainly use some additional pop in the lineup given the weak hitting – only two hits – in their second straight loss to the Giants.

Speaking about Guerrero before the game, Montoya says he believes Guerrero is already proficient enough offensively to insert into the Blue Jays batting order.

“You know the funny thing about it, I haven’t seen him play," Montoyo said. "I hear everything from everybody else – and I believe what people say. But the only time I saw him was at spring training, 20 at-bats that I saw. “But yeah, he’ll come here and do well for sure.” 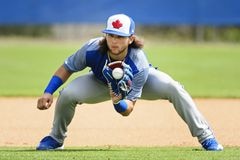 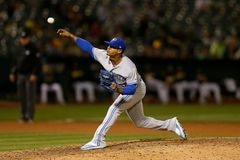 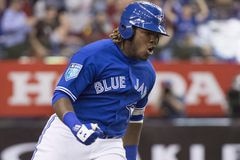