Bruce Cassidy earned a lot of admirers early in the NHL playoffs when his willingness to make adjustments, to counter things such as the Toronto Maple Leafs’ speed game, brought results.

Now the head coach of the Boston Bruins is facing his toughest challenge of this postseason – handling the hard-hitting game the St. Louis Blues employed in winning Game 2 of the Stanley Cup final in overtime. For the first time, the Bruins’ big three of Patrice Bergeron, Brad Marchand and David Pastrnak were squelched in consecutive games, something Cassidy needs to remedy Saturday night in St. Louis with the series tied 1-1.

The Maple Leafs took their first-round series against the Bruins to seven games by periodically frustrating the Bruins’ Perfection Line. But when it mattered, Bergeron, Marchand et al. came back to get the wins they needed. In the next two rounds, neither the Columbus Blue Jackets nor the Carolina Hurricanes could do anything with them.

It is a different story against the punishing Blues. After losing Game 1 because they allowed the Bruins forwards too much room to get moving, the Blues went back to their merciless fore-checking game. There was no room for Boston’s big line to get out of its own end much and even though the game went to overtime, the Blues were the better team for most of the night.

Blues head coach Craig Berube kept his top line of centre Brayden Schenn and wingers Vladimir Tarasenko and Jaden Schwartz on the Bergeron line as much as he could in the first two games. As a result, Bergeron, Marchand and Pastrnak do not have a five-on-five goal among them and they are a collective minus-seven in the two games.

Cassidy made his usual adjustment when the Perfection Line is held in check. He dropped Pastrnak down the lineup and promoted Danton Heinen for the second half of Game 2. He also tried to get the Bruins’ fourth line, led by Sean Kuraly, out against Schenn’s unit whenever possible. With Berube now getting the last line change on home ice, Cassidy said Thursday he expects his top line to see even more of the Schenn line.

“If that's the case, it's a big challenge for [Bergeron, Marchand] and Pastrnak,” Cassidy said. “They've been up to it. I don't imagine that will change. I suspect in Game 3 we'll see their best game of the series. That's speculation, but I suspect that's what will happen.”

Cassidy said a major advantage for the Bruins this spring has been the Bergeron line’s ability to shut down the top lines of the opposition when they themselves have not scored. John Tavares and Mitch Marner of the Maple Leafs, for example, became less effective as the series went on.

Collectively, the Schenn line has three goals and three assists in two games. It does not sound like much but all were during five-on-five play and were important goals. The domination was such that by the end of Game 2, Marchand was running around being the bad old irresponsible Marchand that used to hold the Bruins back.

Bergeron, though, pointed out it was not exactly a scoop that the Blues played a physical game and he and his linemates have been around the block.

“It's what we expected,” he said. “We've seen it against Columbus a little bit, and Carolina was also a physical team. Nothing that we're not used to. Yes, we have to respond and play a physical game.

“It's playoff hockey. We all know that you fight for every inch, every puck battle, whatnot. Nothing that we weren't expecting is happening the last two games. I think we've been handling it well this whole playoff run, we’ve got to keep going.”

On the plus side for Boston, the Bergeron unit and the Bruins as a whole are winning the special-teams battle. All that hitting by the Blues cost them 10 minor penalties over two games. An additional loss may be the services of forward Oskar Sundqvist after his headshot on Bruins defenceman Matt Grzelcyk, who is in concussion protocol and not expected to play in Game 3.

Every time Bergeron, Marchand and Pastrnak have faced a challenge in these playoffs they have responded. Cassidy expects them to this time as well, starting with countering the Blues fore-checking by getting the puck out of the defensive zone faster.

The key is for Marchand and Pastrnak (or Heinen) to win one-on-one battles along the boards as the Bruins defencemen are retrieving the puck at the end boards. That allows for a quick, short pass to get the Bruins moving the other way.

“That’s what we ask, of our forwards, to win that battle on the walls, support that first touch,” Cassidy said. “If we’re able to do that, we’ve been pretty good. The other night that’s where I thought we got stretched out. I think we’re close enough to win those races to pucks. That’s why we defend well.” 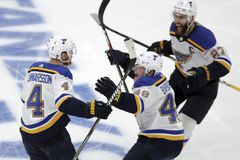 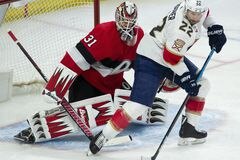 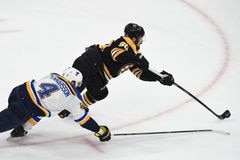