Caster Semenya easily won the women’s 800 at the Prefontaine Classic in Stanford, Calif., on Sunday, as an international court continues to debate her future in the event.

The former Olympic champion and beleaguered three-time world champion won in 1 minute 55.70 seconds, nearly three seconds ahead of second-place Ajee Wilson, in the highly anticipated race at Cobb Track and Angell Field. It’s the fastest-time ever on U.S. soil.

It was the first time Semenya ran the 800 since a Swiss Supreme Court ruled her eligible while it considers her appeal against a new IAAF rule capping testosterone levels in women’s events from the 400 to mile.

One of a handful of runners affected by the ruling, Semenya has been fighting back. The 28-year-old South African refused to take medication to be in compliance and initially planned to side-step it at the Prefontaine by registering to run the 3,000. She was eventually cleared in time for the seventh stop on the Diamond League circuit.

“When I run, I forget about everything. It’s just all about me,” Semenya said. “It’s all about me being free. It’s all about me doing what I love. I treat people with respect and I appreciate them for who they are. I accept them. That’s what I do. For me it’s all about inspiring the youth so they can be better.”

Semenya trailed early but took the lead on the back stretch of the second lap and cruised across the line more than 15 metres ahead of Wilson, who finished in 1:58.36.

Wilson, the American record holder in the 800, was glad to see Semenya cleared to race.

What’s next for Semenya is uncertain. She plans to take four weeks off before resuming her circuit, and will await the final ruling from the Swiss court.

If the case drags on without a quick resolution, Semenya will be in line to defend her title at the World Championships in Doha, Qatar, in September. That’s where Semenya ran a world-leading 1:54.98 on May 3 in her last 800 before Sunday.

If the IAAF ruling is upheld, Semenya’s appearance in the 800 at the Prefontaine may be her last.

“My goal is to defend my world title,” Semenya said. “If I’m not allowed, I’m not allowed. I don’t give a damn. This is a legal battle. It’s like war. You don’t give up. I’m a world champ, I’m an Olympic champion. I’ve achieved everything that I’ve ever wanted. At the end of the day I’m just doing it for those that cannot fight for themselves.”

Semenya admitted to having difficulty adjusting to the time change for the race in California. Shouldering the fight against the IAAF has also taken it’s toll, but Semenya is determined to push on.

“I know how to handle situations, I know how to manage my time, I know how to focus on what I’m doing,” she said. “Other people’s perceptions of me is their own problem, not my problem. I’m living for people. There are young girls and boys out there in the world who look up to me. I can never disappoint them.”

Christian Coleman ran a 9.81 in the 100 to hold off fellow American Justin Gatlin in their first head-to-head matchup since the 2017 world championships. Ivory Coast sprinter Marie-Josée Ta Lou won the women’s 100 in 11.02 while two-time Olympic gold medalist Shelly-Ann Fraser-Pryce of Jamaica. American Rai Benjamin easily won the 400 hurdles with a world-leading 47.16. World record-holder Beatrice Chepkoech of Kenya ran a 8:55.58 to set a meet record in the women’s steeplechase

The meet was temporarily relocated to Stanford for this year while Hayward Field in Eugene, Ore., undergoes a renovation. 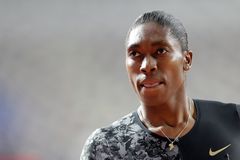 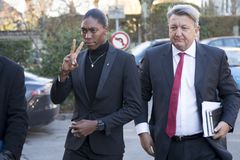 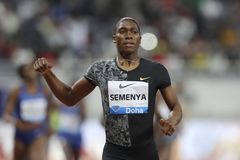