This is not what its initiator had envisioned: there are kids all over the ice – literally, some are all over the ice, stretched out and laying on their back while frolicking with teammates. At one end of the rink, a player has lined up a row of pucks to shoot at an open net, time after time, sometimes for an entire practice. At the other end, a player is pushing an assortment of stuffed animals along the ice with the aid of a small net.

Watching at rink-side, Al Stewart admits this is not what he pictured for his son. It’s better, he says. It’s why 14-year-old Evan Stewart has stepped out of his shadow and improved to the point that he now plays keep-away with a member of the Mount Royal University women’s team, one of several MRU players who volunteer every Sunday morning at Max Bell Arena.

It’s a place where every child wears a jersey with a Calgary Flames patch on it, and every cost, from equipment to registration to ice rental, is covered. All that for a group of frolickers who once had nowhere to turn.

“The Special Olympics has an ice program – speed skating, figure skating – but not hockey,” Stewart says. “No one offered anything for these kids. We had to make it happen.”

The children – 10 with Down syndrome, 11 with autism – are a splinter group of HEROS (Hockey Education Reaching Out Society), a national program designed to show marginalized youth the joy and benefits of the game. For their part, the players are dubbed Super HEROS. When they first took to the ice in mid-October, 18 of them had never been on skates before. Some still struggle to keep up, but the vast majority move about the rink with their volunteers, some laughing, some super intent on bettering their skills. To watch them at play and to see their parents tearing up is to have your heartstrings tugged.

This is hockey as life, not just as therapy.

“We let the kids go into the penalty box because they want to see what’s in there,” explains Kevin Hodgson, the program’s director of operations. “We want the kids to be familiar with the building and the rink, the sounds, the smells, because they are more impacted by external stimuli. They need to feel like it is their safe place.”

It was earlier this year when Stewart tracked down former Calgary sports radio host Rob Kerr for his help in locating a place for autistic youth to play hockey. Kerr referred Stewart to Hodgson, who figured there had to be something already up and operating, only there wasn’t. Ontario has options; Vancouver’s NHL franchise has the Canucks Autism Network, established by part-owners Paolo and Clara Aquilini, who have a son with autism. Then there are the Nanaimo Eagles and Autism Okanagan, organizations that offer hockey for children who likely would not be on the ice otherwise.

But for Alberta, there was a void, and it needed to be filled.

“In Ontario and lots of places in the U.S., they have what’s called Special Hockey for kids with autism and Down’s,” Hodgson says. “Part of the reason those two populations are put together for programming is because autism is prevalent in Down’s. … Very quickly, I realized we could sit and wait for someone [to bring adapted hockey to Alberta], or we could do it ourselves. With Al’s determination, we decided to do it.”

The first stop was at the home of former NHL captain and head coach Brian Sutter, whose nephew, Chris, the son of Darryl Sutter, has Down syndrome. Brian listened to Hodgson’s pitch for a donation from the Sutter Fund then replied, “We’re in for three years.” Canadian Tire’s Jumpstart program was equally keen to make this work for children between the ages of 7 and 17.

“A lot of times, when you start off in sports there’s a big emphasis on, ‘You gotta be the best,’ ” says Kimi Cuch, whose daughter Kiley is one of two girls with Super HEROS. “Being active is important, having the chance to hang out with your peers. The social aspect of hockey. This program is more about having the opportunity to achieve your best.”

Kiley Cuch is 15, has Down syndrome and is hearing-impaired. On this December morning, she is net-propelling a small herd of stuffed animals around the ice to work on her skating and balance. Her parents know she’s excited to come to the rink because of what happens without any prompting.

“She gets out of bed,” her father Brian jokes. “School days, not so much.”

Kiley’s affection for hockey stems from her older, 17-year-old brother, Michael. She attends all his midget-age games and used to put on his sweaty equipment after he’d finished playing – that way she felt like part of a team. The night before her first practice with Super HEROS, Kiley emptied the hockey bag her mom had packed so she could put on her own equipment. She especially liked her jersey. It has the No. 2 on it, the same number as her brother.

It’s much the same story for Nathan Leroux. He is 9, autistic and so into hockey that as soon as he sees a game on TV, he puts on his jersey, plops on the couch and watches with his dad. For two years, father and son had played hockey in their basement. Going to Max Bell Arena has made for noticeable changes in Nathan’s attitude.

“I notice he’s motivated a lot more, and we use hockey as motivation,” says Justin Leroux, who cited an example. “He wouldn’t take vitamins before. Now they’re hockey vitamins.” And they’re taken without a fuss.

A second year of Super HEROS is well into the planning stages. When the program was unveiled, the organizers chose to go with 21 players to ensure each of them got the necessary attention. The talk now is to double that number for 2019-20 thanks to the NHL Players’ Association contributing 25 new sets of equipment. The goal is to have Super HEROS in the four NHL cities in Western Canada – Regina, too – because the effect is real and powerful.

“The first time the kids stepped on the ice, we had a meeting,’ Hodgson recalls. “I told them, ‘Something profound just happened here. You guys became hockey players today and you can tell everybody you’re a hockey player. Nobody can ever take that away from you.’ ”

As Evan Stewart stick-handles away from his volunteer instructor, his father looks on in appreciation. The son who was too shy to go near the puck now chases it along the boards, into corners.

“It’s confidence,” Al Stewart says. “It’s been good for him.” More than anyone could have imagined. 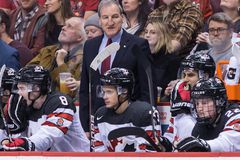 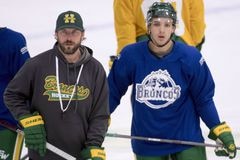 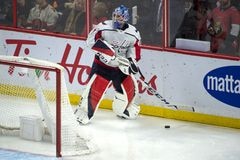