At the risk of coming across like someone trying to defend Snidely Whiplash, your agent would like to make a case for Brad Marchand as a team leader.

Yes, I can hear the guffaws from here but please bear with me. There was a sequence early in the third period of the Boston Bruins’ 5-2 win over the Carolina Hurricanes on Thursday night in the opening game of the NHL’s Eastern Conference final that illustrated why Marchand’s coaches and teammates love him.

By the end of those few minutes, the Bruins turned a 2-1 Hurricanes lead into a 3-2 lead of their own, one they never surrendered. This is not to say the Bruins are going to cruise into the Stanley Cup final, as the Hurricanes are riding one of those improbable Cinderella storylines we see every once in a while, but it does show why Marchand confounds his opponents.

Before we get to the details of the action, it must be noted Marchand went into the playoffs with a reputation as a changed man. His suspension days were behind him, as were things such as licking opponents on their faces. He piled up 100 points in the regular season for the first time in his career with no suspensions to cloud the picture.

In the first round of the playoffs, Marchand was front and centre with his centre, Patrice Bergeron, in knocking off the Toronto Maple Leafs for the second year in a row. Again, there were no sideshow antics.

But in the second round, the bad Marchand emerged, which some, such as his head coach, Bruce Cassidy, think might have happened because he hit a four-game scoring slump. He warmed up by stomping on the stick of Columbus Blue Jackets forward Josh Anderson in Game 1. Then, near the end of Game 3, Marchand punched the Blue Jackets’ Scott Harrington on the back of the head when he was down on the ice.

If you check the replay, it was a sneaky, calculated strike done from behind when no one was looking. In other words, the classic Marchand move. The outrage was long and loud, of course, but Marchand managed to escape a suspension from the league.

The apoplexy of all those who were not Bruins fans increased when Marchand rudely issued a few terse answers to Sportsnet’s Kyle Bukauskas in a live television interview as the series-clinching game concluded. The cartoonish villain was back, so maybe, just maybe, he would do something silly enough to hurt his team in the conference final. Not exactly.

The sequence in question began not long after the opening faceoff in the third period of the opener in Boston. Carolina’s Jordan Staal made a crashing and banging foray up the ice. He started by knocking down Bruins defenceman Connor Clifton and then made his way into the Bruins zone, where he blasted forward Chris Wagner into the boards from behind.

At this point, Clifton arrived on the scene looking for revenge for both the hit on him and his teammate Wagner. He was just about to crash into Staal when Marchand jumped between them. The latter player clearly knew Staal was called for boarding and he did not want Clifton negating the Bruins’ power play with a retaliation penalty. Thanks to Marchand’s intervention, there was no serious collision between Clifton and Staal.

Less than two minutes later, Marchand took a shot on the power play and Marcus Johansson scored on the rebound to tie the score. Twenty-eight seconds after that, when former Bruin Dougie Hamilton was called for roughing, Marchand fed Bergeron for the go-ahead marker, the second of four unanswered goals in the third period.

Those few minutes turned the game around for the Bruins and maybe even set the stage for the series. It was a smart play by a smart player followed by seizing the opportunities.

Hamilton, for example, let his emotions get the best of him when he played his first playoff game against his first NHL team. He was a ninth-overall draft pick by the Bruins in 2011 and never lived up to expectations in Boston. By the time he was traded to the Calgary Flames, where he became a 50-point defenceman before getting shipped to Carolina, there was talk Hamilton was rarely on the same page as some of his Bruins teammates, such as Zdeno Chara.

Thus upon his return to Boston for a playoff game, Hamilton was showered with boos every time he touched the puck. He said later the boos did not bother him, but he did take two penalties in the first six minutes of the third period with the Bruins scoring on the first one.

Marchand, on the other hand, who is supposed to be Mr. Sideshow, knew when to control not only himself but others and what to do when that drew a chance to take over the game. 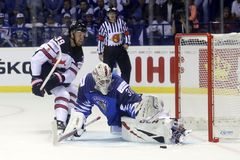 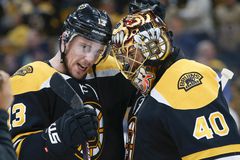 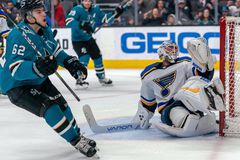