Like everyone else in the NBA, Toronto Raptors coach Nick Nurse was asked about James Harden’s phantom dunk against the Spurs the other night.

Unlike a lot of other people, Nurse didn’t dodge around the question.

“That’s not getting right. Getting it right should be at the top of the list,” Nurse said.

He was, laughing and poking fun at himself for his own atrocious record at coach’s challenges: “Please, I’m using far too much energy on the challenge stuff … let’s have a coaching question.”

A year ago at this point, Nurse would have shrugged and passed on commenting substantively. He was a rookie and went to great lengths not to say much, while still talking a great deal.

These days, he talks less and says more. That’s what a title will do for your confidence.

The Raptors may look good this year – winning games they shouldn’t and whipping teams they should – but nobody in the organization looks more different than Nurse.

As the person who does the bulk of the on-camera work, he has become far more free-wheeling. In preseason, he felt comfortable to light up a few of his underperformers: “We got a couple of spots. They’re open. If somebody wants ‘em.”

Though no NBA coach can afford to be anything less than cordial to his stars (something the NHL might want to take note of), Nurse doesn’t kowtow to his top guys quite as much.

Mid-game, he’s become one of those sideline performers who act as though they are part of the show – running back and forth, freaking out, hugging randos.

Most important, Nurse is building a reputation as the NBA’s tactical MacGyver. Give him three towel guys, the team bus driver and someone who’s never seen a basketball before, and he’ll figure out a way for them to play together.

He did it for most of November when the Raptors were reduced to a bench-heavy roster because of injuries. He was chosen the Eastern Conference coach of the month for his trouble and is an early favourite for coach of the year.

Which made Thursday night a special occasion for Nurse. He was going brain-to-beard against the closest thing the NBA has to an unstoppable force – Harden and the Houston Rockets.

How unstoppable are the Rockets? Pregame, they took their warm-ups in a hallway underneath the Scotiabank Arena, and closed the hallway.

Hallways are where people walk. That is their purpose. Would you go to someone else’s house and say, “I’m going to need the kitchen for a few hours, so …” and then spend that time in the kitchen washing your clothes in the dishwasher? You would if you’re the Houston Rockets.

In fairness, it worked. The Rockets won 119-109. After starting the season undefeated in Toronto, the Raptors have now dropped two in a row here.

The Raptors were able to isolate Harden in the first half. Personal-elimination specialist OG Anunoby was assigned to body duty. Everyone else was expected to rotate in on double teams whenever Harden actually had the ball.

Hating Harden has become a strange staple of the NBA. The Toronto crowd booed him instinctively for a while, without any good reason to do so.

On the plus side, he seems like a lovely guy who does remarkable things on the court. In the minus column, he dated a Kardashian. Yes, he’s also a bit cheater-y when it comes to drawing fouls, but that’s why they pay him so much.

“I haven’t met a basketball player who doesn’t appreciate [his game],” Raptors guard Fred VanVleet – who could not be a more different sort of player – said before the game.

Harden is not quite like any other player in the NBA – entirely tilted toward scoring points.

When he is not involved directly in the play, Harden has the habit of standing so far away from it that you begin to forget he’s playing. At times, he’s on the wrong side of half-court. There’s something very Lionel Messi about his apparent disinterest in anything that doesn’t involve him.

But what he’s doing is hoarding his energy as well as putting you to sleep. While Harden hung back in the first half, Houston’s long-range artillery did work for him. He was limited to six points and, more impressively, two free throws, but everyone else on Houston sank 11 three-pointers. They had guys coming out of the crowd to hit threes.

The Rockets are the Raptors if Toronto didn’t care. They only go in one direction. At the break, it was 63-55 – the most the Raptors had allowed in a first half at home this season.

This would traditionally be Nick Nurse’s time to break out some defensive wrinkles, rotation tweaks or a ouija board – whatever it is he does in the locker room.

What they come up was Serge Ibaka accidentally (sort of, maybe) nailing Harden in the head on a drive. That put him out of the game to start the fourth quarter. When he came back, he came back angry.

Though this loss was the second on the trot, Thursday’s outing was better than the last. Nevertheless, a season that started out so hopefully is in danger of plateauing.

That’s on everyone involved, but the man who has to front whatever comes next is the coach. In the next couple of weeks, we’ll get an even better sense of how much Nick Nurse has changed and how much influence he has over this young squad.

Norman Powell’s newfound consistency, starting and coming off bench, is a good sign for Raptors
December 4, 2019 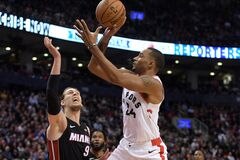 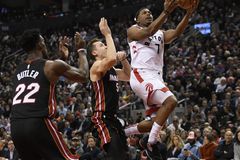 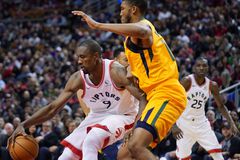