If the Toronto Maple Leafs are to overcome history Tuesday night in the deciding game of their NHL playoff series with the Boston Bruins, then a long list of players needs to perform.

But none more than the line of John Tavares, Mitch Marner and Zach Hyman.

This is not to say those three forwards have much to apologize for over most of the series. They engaged the Bruins’ top line of Patrice Bergeron, Brad Marchand and David Pastrnak so well over the first three games that Boston head coach Bruce Cassidy dispatched Pastrnak to the second line with centre David Krejci for much of the next three.

However, the Bruins’ big three remain their best players after six games, mainly because of their work on the team’s formidable power play. Thanks to a 43.8-per-cent rate of success from that unit (second best in the postseason) overall and a perfect 2-for-2 on Sunday, the Leafs were unable to seize the chance to close out the Bruins at home. Now, they have to face their third Game 7 in seven years in Boston and hope they can avoid the heartbreak of the first two.

They will need the three members of the Tavares line to step up and dominate the Bruins trio in more than just the five-on-five play. Marner and Hyman, in particular, have to figure out how to get better because they are part of the Leafs’ shabby penalty-killing unit.

That group coughed up two goals on two opportunities in the 4-2 loss in Game 6 that tied the series 3-3. Those goals stunned the Leafs, leaving them in a fog through the second period. They were never able to seriously threaten the Bruins’ lead despite some good work in the third.

Bergeron owned Hyman in the faceoff circle when he was on the power play. The Bruins’ top centre won all four faceoffs against Hyman with the man-advantage on Sunday, and has won 16-of-21 against him overall.

But it is hard to lay all of this on Hyman. He and Marner are a forward unit on the penalty kill, but neither is a centre. So expecting Hyman to win most of the faceoffs against the best two-way centre in the league is a bit much.

However, it is not too much to expect head coach Mike Babcock to figure out a way for someone to take some of the load off when it comes to defensive zone faceoffs. By the end of Game 6, it was clear the strategy was for Hyman to simply tie up Bergeron as best he could when the puck was dropped in the hope Marner or a defenceman such as Ron Hainsey would clear the puck. But when Marner missed a chance to clear, Marchand managed to bounce a shot off Hainsey to start the Boston charge.

Another potential solution is sending Tavares out to take some of those draws then change ASAP, assuming he wins them. But that is a major change to the unit and potentially disruptive. All Babcock would say Monday is he knows the unit has to be fixed and, the hockey gods willing, it will be.

Simply noting the unit plays much better in Boston than it does in Toronto is not going to do the trick. The preferred method seems to be getting back to aggressive play by the penalty killers deep in the Boston zone, in an attempt to choke off the Bruins’ rush before it can get started or challenging them at the Leafs blue line in order to force a dump-in that can be cleared quickly.

“I think the biggest thing it goes bad on you is you get passive instead of just [giving it the] gas,” Babcock said. “Let’s go, let’s put some pressure on. The one [power-play] goal is off a faceoff right away, it bounced to him, but it gets you on your heels. Then we were passive on the next one and they’ve got good players.

“Let's not be passive, let's go after them. I thought we had a real good game on the penalty kill last time we were in Boston, we plan on doing the same.”

Another major problem is Marner’s overall offence. In Games 4 through 6 he has one assist while Marchand, playing opposite him much of the time, has three goals and three assists. Marner says the defensive responsibilities of looking after the Bergeron line mean not taking chances on offence for him and his linemates, something that is not going to change in Game 7.

“For me personally, it's just trying to make sure I'm always above people. I'm not trying to cheat for offence or anything like that,” he said. “Our line, I think, we're always thinking of the defensive side of the puck. We don't really cheat for too much offence and cheat for too many chances. We're going to have to, again, do that [Tuesday].

Something else he might try, according to Babcock, is to relax.

“I just think the biggest thing for Mitch is you’re playing against real good players and just breathe, don’t spend a whole lot of time worrying about what everyone else thinks, just breathe and play hard and enjoy yourself,” the coach said.

“When he was a kid he probably played road hockey and, at this time of year, he was probably whoever scored the winning goal the night before. Be the same, just get out there and play.” 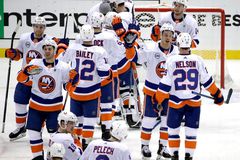 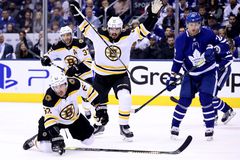