For a second straight Sunday, the Raptors earned a heart-thumping playoff victory in Toronto. This one gave the team new life in the Eastern Conference finals.

After losing the first two games of this series on the road and putting their season of dreams on shaky ground, the Raptors outlasted the Milwaukee Bucks at home and earned a white-knuckled 118-112 double overtime victory.

Pascal Siakam had 25 in his 51 minutes, and Norman Powell contributed 19 in another prominent outing off the bench. Marc Gasol had 16 – including four three-pointers – while Kyle Lowry added 11 points before fouling out in the fourth.

George Hill had 24 to guide the Bucks, while Malcolm Brogdon had 20. Antetokounmpo was held to 12 on 5-of-16 shooting, and fouled out in OT.

“His defence was probably the biggest key of the game,” said Toronto coach Nick Nurse of Leonard.

After two tough losses in Milwaukee, the Raptors were back home, where exactly one week earlier, Leonard had hit the biggest buzzer-beater in franchise history to eliminate the Philadelphia 76ers in a dramatic Game 7.

Nurse suggested before the game there would be lineup changes with his team down 0-2 in the series. He stuck with his usual starters, but changed some defensive assignments – including making his superstar the primary defender on Antetokounmpo. He also used different combinations of starters and bench players throughout the night.

Gasol began the game like a player on a mission after struggling mightily in the first two games of the series. On Sunday, the Spanish big man opened the first quarter with an eight-point outburst while dominating the boards and dishing out assists.

Just as he had in Game 2, Norman Powell provided a huge energy spark off the bench – 10 fast points, including a pair of threes.

The Raps only got four points from Leonard in the opening quarter. The Raps star seemed to land badly after his early-game dunk – appearing to side-step around an official, but kept playing without more than a brief bit of limping and grimacing. It’s unclear what is injured, exactly what occurred and how bad it may be.

“I’m good, I’m just gonna keep fighting, keep playing,” said Leonard after the game, following a very long stay in the tub, making him the last Raptor left in the locker room. “I’ve just gotta not worry about it, get my treatment and move on to the next one.”

Toronto held Antetokounmpo to two points, created six turnovers and capitalized on them, and took a commanding 30-21 lead into the second.

Antetokounmpo had a few dazzling moments in the second – including his Euro-step around both Lowry and Gasol that turned into a picturesque finger-roll bucket. Still Toronto had the Greek superstar to just six points by half time.

Powell and Ibaka got a longer run in the second quarter -- even when the rest of the starters returned. Danny Green (who was 0-for-4 at the time) and Gasol spent a big chunk of time on the bench.

Meanwhile Leonard rolled for 11 second-quarter points, and Siakam heated up too for eight. Ibaka’s three-pointer to close out the half gave the Raps a 58-51 lead going into the locker room.

The Bucks surged several times in the third quarter, and the Raps mostly held them from getting too close. But with a bench-heavy lineup closing out the third for Toronto, Milwaukee pushed to within two.

The Raps clung to a very feeble one-bucket lead going into the final quarter.

Half-way through the quarter, Lowry fouled out -- going to the bench with five assists and four rebounds also on his stat line on a 4-of-7 shooting night. Fred Van Vleet (0-for-5 to that point) took his spot.

After persistently threatening, the Bucks finally tied the game with four minutes left.

A game Toronto once lead by as much as 11 points turned into a shoot-out down the stretch. Tense moments abounded in the fourth. Perhaps the biggest was Siakam missing a pair of free throws with seven seconds on the clock and his Raps team clinging to a fragile two-point lead.

That would give the Bucks back the ball, and allow Kris Middleton to score the tying put-back two-pointer. Siakam got the chance to redeem himself with a game-winning attempt at the buzzer, but missed.

Overtime included Green’s first bucket of the night and a Leonard rim-bouncer similar to his shot last Sunday. Hill and Brogdon hit for Milwaukee. Gasol remained on the floor and played physical defence, despite living on the edge with five fouls. Toronto fans alternated between roaring and holding their breath, then waved with delight as Antetokounmpo fouled out.

Leonard hit the big ones late – eight points in the final overtime to close out another extraordinary night, in which fans would serenade him with MVP chants. His stats also included a block, two steals, five assists and nine rebounds.

“When you’re out there, I’m not thinking I’m down 0-2 at the time, it’s just playoff basketball and you’ve gotta live in the moment,” said Leonard. “Once you do that, you can live with the results. Like I tell guys, I don’t care if you make or miss shots, it’s about playing smart and aggressive and not making mistakes on the defensive end. That’s all you can really do.”

With the Bucks leading the series 2-1, Game 4 will take place Tuesday in Toronto. Game 5 will be Thursday in Milwaukee.

Opinion
Kawhi Leonard wills himself to a stunning display of total basketball
May 19, 2019 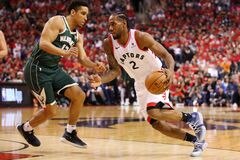 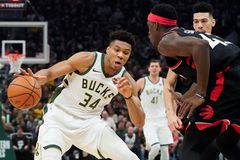 Opinion
Bucks keep pedal to the metal to blow out Raptors in Game 2
May 17, 2019 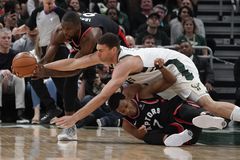 Opinion
A long series looms as the Raptors let Game 1 slip away against the Bucks
May 16, 2019 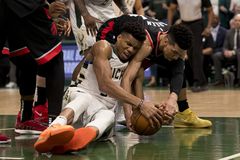