When Scott Mathieson announced his retirement from professional baseball last month, he was already envisioning a temporary comeback – and a better way to officially end his playing career.

The 35-year-old from Aldergrove, B.C., hung up his cleats after eight seasons with the Yomiuri Giants in October, but he wants to return to Japan next summer to pitch for Canada at the Tokyo Olympics.

“That’s one of my main goals, to have the last time I pitch in a competitive game be in Japan while wearing a Canada jersey,” Mathieson said in a phone interview. “I had the majority of my success in Japan, so to be able to finish it there while representing my own country, that’s the dream.

“That’s the goal I’m working towards.”

He’ll need some help getting there.

Mathieson and the Canadian team failed in their first chance to qualify for the 2020 Olympics earlier this month when they finished seventh at Premier 12. Bronze medalist Mexico nabbed one spot as the top finisher from the Americas region, while silver-medalist South Korea also qualified. Gold-medal winning Japan was already assured its Olympic spot as the host country.

Canada will have two more chances to qualify for the Games – by winning the Americas qualifier in Arizona in March, or by winning a last-ditch qualifier later in the year that will determine the sixth and final spot in the Olympic tournament.

“Some of those other teams like Korea and Cuba, they play all year round,” said outfielder Tristan Pompey, who was 1 for 7 with a double and an RBI. “For us, once the season’s over a lot of guys shut it down and they don’t swing for a while. Even when you’re trying to prepare for a tournament like this, you’re not seeing live pitching, so you’re already kinda behind in that aspect.

“But we’ve done it before, we’ve come off not playing for long stretches and played to our abilities. It just didn’t pan out the way we expected this time.”

Mathieson was succinct in his assessment of what Canada needs to improve before the next qualifier.

“We definitely need to hit,” he said. “We just gotta go out and play and it’s going to be tough. ... Hopefully the guys are coming in ready for the season and in a bit better game-ready shape, because we need to put up runs. We need a whole team effort.”

The timing of the March qualifier – in the middle of spring training – may also hurt Canada’s ability to field its best roster.

Pompey, a third-round pick of the Marlins in 2018, said he wants to compete but needs Miami’s permission. Other players will be in the same boat.

“It’s going to be a little more challenging but the mentality has to be all hands on deck,” said Pompey, who spent last season with the Marlins’ high-A affiliate. “Whoever is able to come is going to have to really give it their all to get this program to the Olympics. Guys will be trying to earn spots in their organizations at different levels, trying to get to the next level, so it’s going to be tough for us.

Canada’s best showing at an Olympics was fourth place in Athens in 2004, when it lost to Japan in the bronze-medal game. That tournament also gave Pompey one of his earliest baseball memories, watching from his Mississauga home as centre-fielder Adam Stern made a remarkable catch at the wall during a round-robin game against Greece.

“That was the one highlight that stood out to me, it was just awesome,” said Pompey, who was seven years old at the time.

Next summer’s Games will mark baseball’s return to the Olympic program for the first time since 2008.

The 2020 version will feature just six teams, down from eight in each of the previous five Olympics from 1992 to 2008.

“It’s very disappointing, especially when it’s in Japan, a country that has such a fanatical fan base,” he said. “They could have held a much bigger tournament with a lot more games and they’d probably sell out all of them.”

Pompey said that qualifying for the Olympics would be an important step for the growth of the Canadian program.

But the success of young Canadians in the major leagues – such as Braves right-hander Mike Soroka, who finished second in NL Rookie of the Year voting this season, and promising young Padres slugger Josh Naylor – helps, too.

“Going to the Olympics would be massive, 100 per cent,” Pompey said. “But if you look at Canadian baseball now, the future’s already starting to go off. You’ve got Soroka, Naylor, all these young guys that I played with on the junior national team are already doing well in the big leagues.

“If that doesn’t inspire young kids, I don’t know what will.” 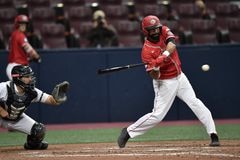 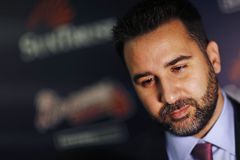