Houston’s pair of aces dealt the Astros a pair of wins.

Gerrit Cole carried his splendid September into an outstanding October with a 15-strikeout performance and Alex Bregman handed fans chanting MVP the mighty swing they craved. The Astros survived a wild ninth inning to beat the Tampa Bay Rays 3-1 on Saturday night for a 2-0 lead in their AL Division Series.

Houston is one win from reaching the AL Championship Series for the third straight year.

“We’ve got a lot more work to take care of,” Cole said. “There’s a few months this winter that maybe we can sit back and have a drink about it. Right now, it’s on to the next one.”

Cole, 5-0 with a 1.07 ERA in six starts last month, set an Astros post-season strikeouts record over 7 2/3 scoreless innings to win his franchise-record 17th straight decision. The strikeouts tied for third-most in a post-season game, behind only Bob Gibson’s 17 in the 1968 World Series and Kevin Brown’s 16 in a 1998 NL Division Series.

“He was incredible,” manager AJ Hinch said. “He had complete command of the entire game.”

Throwback performances from another era.

“Whether it’s about the new-age opener or pulling guys third time through, most of the people that support that haven’t had Verlander or Cole on their team,” Hinch said. “It’s hard for me to relate to having to pull guys early or wanting to pull guys early when these guys are putting up these kinds of performances. … I’m going to roll with these boys while we have them.”

Cole (1-0), who led the majors with 326 strikeouts in the regular season, extended his big league record with his 10th straight game with at least 10 Ks. The Rays were unable to string anything together off of him on a night he induced 33 swings and misses — the most in a post-season game since MLB started tracking the stat in 2008 — and threw a career-high 118 pitches.

“I don’t think anything he did was surprising,” Rays manager Kevin Cash said. “He’s just that good.”

“He was majestic,” the Rays’ Willy Adames said.

Kevin Kiemaier doubled with two outs in the eighth and Cole was lifted after putting on Adames with Tampa Bay’s first walk. The right-hander received a standing ovation as he walked off the mound and waved to the crowd just before he reached the dugout. Roberto Osuna took over and struck out Yandy Díaz to end the inning before loading the bases with no outs in the ninth.

Travis d’Arnaud worked the count full, then struck out on a high cutter. Kiermaier grounded to first baseman Yuli Gurriel, who flipped to Harris, who stepped on first for the save.

Tampa Bay is hitting .177 with two extra-base hits. Game 3 of the best-of five series is Monday in Florida.

Bregman, who hit a career-best 41 home runs in the regular season, homered off Blake Snell (0-1) leading off the fourth.

“It’s just lack of a pitch,” Snell said. “I’m still finding it, still trying to get there. I know I can, so that’s why it’s frustrating.”

All seven of Bregman’s homers have come off All-Stars, including two against Chris Sale and one each vs. Trevor Bauer, Clayton Kershaw, Corey Kluber and Kenley Jansen.

His shot gave the Astros a home run in 27 straight games, extending a franchise record.

After Lowe’s error at second gifted Houston two runs in the opener, another error on helped in the seventh. Adames bobbled Gurriel’s leadoff grounder to shortstop, then bounced the throw to first. Carlos Correa doubled and Martín Maldonado blooped a run-scoring single to left.

Correa added a two-out RBI single off Nick Anderson in the eighth for a 3-0 lead.

Snell, the 2018 AL Cy Young Award winner, sat out from July 22-Sept. 17 after arthroscopic surgery to remove bone chips in his left elbow. He didn’t get out of the third inning in any of his three September starts, but said he hoped to give the Rays five innings on Saturday. Instead he was lifted one batter after Bregman’s homer, finishing with four hits and a strikeout in 3 1/3 innings.

“I wish I would have gone deeper,” Snell said. “When you face a guy like that, you want to be out there as long as him.” 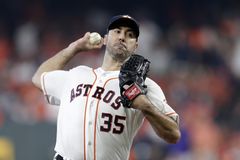 Opinion
What separates the playoff-bound Rays and the sad-sack Jays? The Rays keep on trying
October 5, 2019 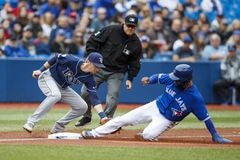 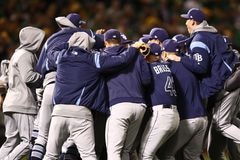