Back at home after a long road trip, and slugging through a stretch without two of their best players, the Toronto Raptors leaned on OG Anunoby, their bench and some hot passing to earn a win Monday night.

Anunoby led the way with a career-high 24 points and five rebounds as the Raptors demolished the visiting Charlotte Hornets 132-96. Toronto was zipping the ball all night, establishing a new franchise record with 40 assists on 50 made field goals.

The Raptors were back at Scotiabank Arena after a road swing that lasted a week and a half and saw them go 3-2 in five Western Conference cities while losing Kyle Lowry and Serge Ibaka to injuries. A little weary from the road, the Raps avoided succumbing to what they had previously admitted had all the trappings of a letdown game. Instead, they improved to 9-4 over all and remained a perfect 5-0 at home.

Fred VanVleet had an uncharacteristically lacklustre 3-of-12 shooting night for 11 points, but added eight assists and four rebounds.

The Raps went with a lineup of Chris Boucher, Matt Thomas, Hollis-Jefferson, Davis and Siakam for a sizable chunk of the second quarter while VanVleet went to the bench for a breather. VanVleet did not shoot well in the first half – just 1-for-6 – yet the stretch was a stark reminder that the Raps don’t have another point guard to call on with Lowry injured.

Hollis-Jefferson made his presence felt in that shift – adding 15 points and four rebounds during his 12 first-half minutes. But he also picked up three of his four fouls in that quarter. He would contribute eight rebounds on the night.

The newcomer, who signed a one-year deal in Toronto after four years with the Brooklyn Nets, had really impressed coach Nick Nurse in the minutes he was given during the Western road trip, playing in four of the five games. In the final three games out West, he played more than 25 minutes in each outing, averaging 11 points, eight rebounds and two steals while also providing defence on some big wing players.

“I’m probably most impressed with his feet, to be honest. For his size and strength, he really can move his feet. We can put him on even smaller guys 'cause he can really slide side to side and he’s a relentless worker,” Nurse said of Hollis-Jefferson. “I’m impressed with his offence. He’s been cutting in there, finding the right timing, he comes in, blasts in hard from what we call our dunker spot, and he does it with force and moves it around and makes a good share of layups, draws a good share of free throws.”

Toronto led by as much as nine in the opening half, but kept letting Charlotte back in, even allowing the Hornets to pull ahead in the last minute before halftime. But a pair of dunks by Anunoby and a three-pointer by Marc Gasol eased the Raps back ahead 60-56 going into the locker room.

The Raps outscored the Hornets 32-18 in a dominant third quarter, and the game tipped completely into a one-sided affair.

Anunoby exploded for 16 points in that quarter – including four three-pointers. He had tied his career high of 22 points before the fourth quarter had even arrived. Anunoby had missed the second-last game on the trip – in Portland – because former Raptor Kawhi Leonard inadvertently poked him in the eye during the previous game in Los Angeles. Anunoby had returned for the final game of the road swing in Dallas but hadn’t been himself. Nurse was thrilled to see him bounce back Monday.

“I didn’t think he played that great in Dallas after a little time off,” said Nurse. “I think he was medium in the first half even tonight, so it was good to see him get a boost of confidence and play so great in the second half.”

Charlotte’s Nicolas Batum inadvertently elbowed Anunoby in the eye during the final seconds of the quarter, so the Raps forward headed for the locker room to have it examined. Anunoby said after the game that the eye felt “a bit better.”

Anunoby was 4-for-7 from 3-point range Monday, and has shown a marked improvement from deep in recent weeks.

“I work on it every day, so each day I get more comfortable,” he said.

With a hefty lead late in the fourth quarter, the Raps called down the bench and brought everyone in. That included Malcolm Miller (five points) and rookies Oshae Brissett (no points) and Dewan Hernandez (two points), who made his NBA debut.

The Charlotte Hornets, who dropped to 6-8, were led by 14 points from Marvin Williams and 13 apiece from Miles Bridges and ex-Raptor Bismack Biyombo.

The Raptors will be back at it on Wednesday with a home contest against the Orlando Magic. Then they will be off to Atlanta for a Saturday game against the Hawks. 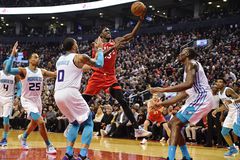 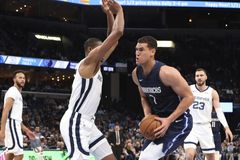 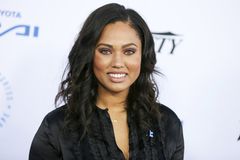