The NHL may be playing a new version of hockey these days, but what happened in Game 1 of the Stanley Cup final was as old as the league itself.

Back in the day, when there was more hitting than fancy skating (although the Boston Bruins and St. Louis Blues have more than a little old-school in them), it was called going into a shell. One team takes a good lead, two goals or more, and then stops skating, preferring to drop back and try to prevent goals rather than carrying the play.

It is the natural instinct, protect what you have rather than risk getting caught up ice and giving up easy goals. Sometimes it works but many times it does not, which is why coaches and players are always yelling to keep skating, take the play to them.

If anyone was yelling that at the Blues on Monday night after they took a 2-0 lead by the one-minute mark of the second period, they weren’t listening. The Bruins, who gave up that lead in large part because they were trying to scrape 10 days of rust off their skates, took full advantage when the Blues defencemen began to back off from jumping into the rush.

As a group, the Blues defencemen are not the most mobile in the NHL. They do have skill in Alex Pietrangelo and Colton Parayko, and of course there is size all through the lineup, but speed is not one of their top attributes. However, this doesn’t mean they can’t contain the Bruins forwards.

Smarts still count as much as speed in the NHL and the Blues defencemen played it smart in the first period. They were aggressive in supporting the forwards who were playing the classic Blues style of taking charge in the offensive zone, which produced two goals in the first 21 minutes.

It was the smart way to play against a team that had been sitting around for 10 days waiting for the Stanley Cup final to begin. For example, the Bruins’ big pair of Patrice Bergeron and Brad Marchand could not break through the crowd of Blues forwards in their own end, and when they fought to their own blueline, the St. Louis defencemen were still playing up far enough to break up the Boston attack.

However, once the Blues got that lead, it was as if the same thought went through all six defencemen at the same time: Let’s not blow this. In this case, not blowing it meant showing way too much respect for the speed of the Bruins forwards, which played right to their strengths.

The Blues defence essentially surrendered the neutral zone to the Bruins. Their concern about not getting beat in a foot race had them backing up into their own zone, which left great swatches of open ice between the bluelines.

This allowed the Bruins to do two things – enter the offensive zone with speed and use all that room to get the puck moving from side to side. The latter tactic created problems for Blues goaltender Jordan Binnington. No goaltender likes to be kept off-balance and the Bruins did not allow the heretofore hot rookie to get comfortable because he was kept shifting back and forth as they moved the puck across the slot.

All that room allowed the Bruins defence to get in on the fun as well. As the Bruins moved into the neutral zone with speed, the defencemen could jump into the rush. Their first goal, which came just one minute and 16 seconds after the Blues went up 2-0, was a textbook example.

Boston forward Sean Kuraly used his speed to carry the puck through the neutral zone on the left side, with the Blues defence pair of Carl Gunnarsson and Robert Bortuzzo dropping back so quickly Kuraly had all the room he needed. As he approached the St. Louis blueline, Kuraly shifted to the right, which drew Binnington to that side. But as this was happening, Bruins defenceman Connor Clifton was charging up the left side. He arrived at the left side of the net just as Kuraly threw the puck to him and it was an easy redirect to the open side of the net as Binnington was caught on his knees well to the right.

This is not to say the Bruins have the Blues on the run. The game was as physical as expected and the Blues gave almost as good as they got in that department, even if the big hit by Boston defenceman Torey Krug on Blues forward Robert Thomas in the third period sent a surge of electricity through the Bruins.

There will be adjustments to how the Blues play the gap between the forwards and defence and, even better for them, it looks as if Vince Dunn will play in Game 2 on Wednesday night. He is their most mobile defenceman and has been missed since taking a puck to the face in Game 3 of the Western Conference final.

And the Blues have the early lead in the best-quote sweepstakes. Binnington had this to say after Krug followed his hit on Thomas by charging toward him: “It was more of a stare. His pupils were pretty big. I don’t know if he’s on something but … he was pretty fired up.” 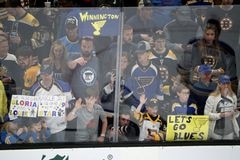 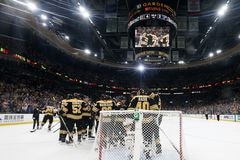 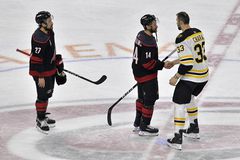