Playoff heroes who drop face-first in front of slap shots are not supposed to look and act like Mitch Marner.

They are serious dudes.

They have a four-day covering of grizzle on their chins, except during the NHL postseason, when they sport a beard that is the envy of the Amish. There’s a pinch of snuff under their lower lip and they prefer their beer with a shot of rye. Hipsters cross the street when they see them coming.

They drive either a Dodge Ram or Ford F-150 pickup truck with an ATV in the back. None of them would be caught dead in a skinny suit with flood pants and long-toed brown shoes. If there is an itch, it will be scratched.

These are people like Marner’s Toronto Maple Leafs teammate Ron Hainsey, who embraces his role as the team curmudgeon. Or 6 foot 9 Zdeno Chara of the Boston Bruins, the most fearsome character in hockey.

They are not 21-year-old sprites who do not look old enough to hold a driver’s licence. Or go viral on social media because someone filmed their habit of eating ice cream like a toddler – mashing it into a soupy goo.

Marner had to admit before the playoff series started that while it may be his third postseason in the NHL, he still can’t muster anything close to a playoff beard.

“The peach fuzz gets a little heavier now but maybe I’ll see if I can go somewhere and get it dyed or something like that,” he said. “But it’s probably just going to look gross.”

But Marner’s answer when he was asked why he didn’t worry about throwing himself face-first in front of two consecutive David Pastrnak slap shots in the final seconds of Game 3 on Monday night to preserve a 3-2 win was pure old-school.

Everyone was still talking about it on Tuesday as the Leafs prepared to take their 2-1 first-round lead over the Bruins in front of the home fans again in Game 4 on Wednesday. If you never laid eyes on Marner, you would swear everyone was talking about some larger-than-life character, such as Mark Messier.

But Marner is today’s NHL version of the complete player. He uses his wits and his quick hands to both create goals and take them away from opponents, rather than send bodies flying.

Marner came into the league in 2016 with a reputation as a wizard on offence, and lived up to it. Then he took a big step forward this season when Leafs head coach Mike Babcock paired him with John Tavares, the team’s prize free-agent catch.

Tavares scored a career-high 47 goals thanks to an almost-instant chemistry with Marner the playmaker, who wound up with 68 assists and 94 points to lead the team. But it was Marner’s development on the defensive side of the game that really opened eyes around the league.

He lobbied and got a spot on the penalty-killing unit. Then he showed everyone how to use smarts and stickhandling skills to take the puck away from the other side’s big stars.

In this first-round series, Marner, Tavares and Zach Hyman have neutralized the Bruins’ big line, the one they call the Perfection Line. Last year, when the Bruins eliminated the Leafs in seven games, Patrice Bergeron, Brad Marchand and Pastrnak lived up to their moniker.

Bergeron et al. ran up 30 points against the Leafs in that series last year, 25 of them at five-on-five, to overwhelm them. Once Nazem Kadri got himself suspended for three games in that series for one of his head shots, the Leafs had no answer at centre for Bergeron.

Now they have Tavares, so it didn’t hurt as much when Kadri once again reminded us all he has no common sense and got himself suspended for the series. Babcock used his home-ice advantage of last change to keep Tavares’s line against Bergeron’s as much as possible. The Perfection Line managed a perfect zero in Game 3, as in zero points. In three games, they have two points at even strength, six in total, the same number Tavares and his linemates have. Babcock will take that all night, every night.

And when Marner drops in front of his opposite number Pastrnak to block the Bruins’ last gasp with no regard to his cherubic visage, Tavares and the rest of the Leafs soak up the adrenalin rush. It is a side of Marner that Tavares admits he didn’t know about, even though he had a healthy respect for his offensive skills when he signed with the Leafs last summer.

“I think, over all, he was a talented player with great hockey sense,” Tavares said. “Obviously, to do what he did in his first couple of years with the amount of spotlight that’s been on him is pretty impressive. I knew that.

“But once you’re around him every day and playing with him game-in and game-out, there’s always times that he wows you, and things you are very impressed by.”

And if you’re asking about reactions to Marner’s preschool ice-cream habits, he will tell you a certain Toronto FC soccer star approves: “I saw [Jozy] Altidore said that he does the same thing, so I’m not the only one who does it.” 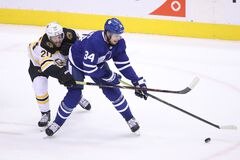 Opinion
With bounce-back win, Leafs show why this playoff battle against the Bruins is different Subscriber content
April 15, 2019 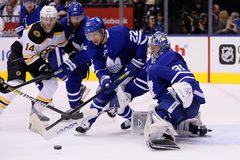 Leafs’ Kadri suspended for rest of the first round Subscriber content
April 15, 2019 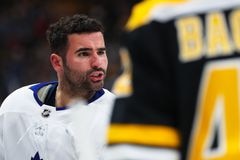