Despite watching his team win 7-2 in Winnipeg to kick off the season, Mike Babcock wants improvements in Saturday's home opener against the New York Rangers.

The Maple Leafs coach reeled off Toronto's eight penalties Wednesday night against the Jets, a docket that ranged from too many men on the ice and an equipment violation (Leo Komarov's askew visor) to four high-sticking calls.

"Stay out of the box, that will really help us with goals-against and then just [a] commitment to doing things right," Babcock's wish list read after practice Friday. "As a group, we have been through enough. We know how to do it right, we've just got to do it right."

The young guns now get to showcase their skills before a home crowd filled with expectations after a breakthrough 2016-17 season that saw the Leafs (40-27-15) improve by 29 points over the previous year and take the first-place Washington Capitals to six games in a tight first-round playoff series.

For defenceman Morgan Rielly, the home opener is a chance to "get better defensively."

"There are things we can improve on for sure," he said. "We had a good meeting today, talked about New York and what they bring to the table so we're going to be ready."

The Rangers lost their home opener 4-2 on Thursday to Colorado despite outshooting the Avalanche 39-26.

There was plenty of talk Friday about the early wave of offence in the league with hat tricks from Edmonton's Connor McDavid, Philadelphia's Wayne Simmonds, Washington's Alex Ovechkin and Chicago's Brandon Saad.

"You look around the league, there's lots of speed and lots of skill," said Rielly. "I think it's great for the league, it makes it very exciting," he added.

But not for defencemen.

Matthews is loving it, however.

"Guys are coming in and they're ready to play and they're making an impact for their team," said Matthews, who did just that last season when he scored 41 goals and won rookie of the year honours. "You see it on pretty much every team now; they've got a guy that's pretty young, that's coming in and he's not just being a role player, he's playing a pretty big part on that team.

"Fortunately for us, we've got six or seven of those guys that can pretty much play anywhere and make an impact every night in different ways. You can see the league kind of trending to some younger guys, some younger talent. It's definitely fun to be a part of."

"I'm excited," said Marleau. "It's going to be a great atmosphere to go into. They usually all are, but now it's a little bit different for me with the new club and everything."

Babcock has also seen more than his share of home openers and says while he still appreciates them, he doesn't need a special occasion to remember how exciting hockey is.

"Hockey's exciting about hockey, so I don't need anything to get me more fired up about it," he said in typical Babcock-ese. "In saying that, I think the home opener is a great thing. It's a celebration of the start of the year.

"I'm glad we played a game already, so you get that under your belt. I thought we weren't very good early in that game and ideally we'll be better in this game. But I think it's important to celebrate your team with your fans in your city and that's what the opening night about. We have to find a well to play well."

It looks like defenceman Calle Rosen and centre Dominic Moore will come in Saturday, replacing Andreas Borgman and Eric Fehr.

Babcock said he opted to play Fehr in Winnipeg because he's from Winkler, Man. Moore gets the nod Saturday because he once played for the Rangers.

He decided to alternate Borgman and Rosen the first two games because "I didn't know the difference between the two of them."

Fehr and Moore are vying to be the team's fourth-line centre. Borgman, Rosen and Martin Marincin, who played for the AHL Marlies on Friday, are competing for the role of sixth defenceman.

Babcock has said all along it will take some time to settle on his final lineup.

"We're going to figure it out," he said.

Toronto added some depth at goaltender Friday, acquiring Calvin Pickard from the Vegas Golden Knights in exchange for forward Tobias Lindberg and a sixth-round selection in the 2018 draft. Pickard was assigned to the Marlies.

The 25-year-old posted a 15-31-2 record with a 2.98 goals-against average and a .904 save percentage in 50 games with Colorado last season. He was selected by the Golden Knights in the expansion draft.

Maple Leafs pile on the goals in season-opening rout of Jets
October 5, 2017 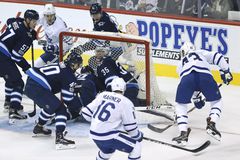 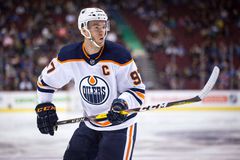