A familiar name from the past is back competing for Canada in international show-jumping circles – and, as with any story involving the return of the prodigal, everyone around Spruce Meadows couldn't be happier.

At 19, Mario Deslauriers became the youngest rider ever to win the World Cup of show jumping. It happened in 1984, in Gothenberg, Sweden, aboard Aramis; a breakthrough moment for Deslauriers, who went on to become a fixture on the Canadian show-jumping team for decades.

But after twice riding for Canada in the Olympics – in 1984 and 1988 – Deslauriers began to ride internationally for the United States in 2009, after getting his U.S. citizenship. Deslauriers had been recruited to ride for Jane Clark, an influential U.S. owner, one who gave him access to a level of horses he wasn't getting in Canada.

But now, with the Spruce Meadows Masters CSIO 5 tournament set to open on Wednesday, Deslauriers is back where it all started, riding for Canada again. He will be one of four riders selected by chef d'équipe Mark Laskin to compete for Canada in Saturday's BMO Nations Cup. The starting field includes the entire medal podium from the team-jumping event at the 2014 Olympics in Rio de Janeiro (France, the United States and Germany), as well as defending champion Switzerland, plus Canada, Belgium, Italy and Brazil.

Laskin named Deslauriers to his team, along with Ian Millar, Eric Lamaze and up-and-comer Keean White.

According to Laskin, he and Deslauriers have been discussing a return "for quite a while. He just never had the horses to justify doing it. This year, he has a couple of new ones. They were here for the summer series and they matured and developed a little faster than he thought.

"There's a two-year waiting period for [reinstatement] to happen, and during that time, you can't represent your country. Mario was actually at his father's event in Bromont [Que.] in August and there was a World Cup class he couldn't enter; otherwise, his two-year waiting cycle would have been retriggered. Shortly thereafter, it was confirmed that he could ride for Canada again.

"Our depth is a little bit suspect at the highest level at the moment, so we're really happy to include him on our team for Saturday."

Even though he's spent most of his competitive life working and competing in the United States, Deslauriers said: "Always at heart, I was a Canadian. It feels like the right way to finish my career."

Back when Deslauriers was 17, he was a student of Millar's, so their relationship spans 35 years. Since the Nation's Cup started in 1977, Canada has only won the event twice. The first time came in 2006, with Millar riding In Style and Deslauriers on Paradigm. Millar and Deslauriers have won multiple events competing on the same team over the years.

"When Mario's riding on your team, you know you're going to get the best shot," Millar said.

"He's got ice water in his veins, so when it really gets tough and difficult, he's going to be the man. It's very, very good to have him back."

Deslauriers is here with Westbrook, a grey that he originally purchased back in March as a second horse for his daughter Lucy, who is also starting to make a name for herself in the equestrian world. Deslauriers adopted Lucy and her twin brother Jack when he married their mother, Lisa, in 2009. The family lives in the Hamptons, just outside New York, and just this past week, Lucy finished seventh at the Hampton Classic.

Westbrook, Deslauriers said, "was maybe a little bit strong for her. She rode him a little – it was working okay. But starting here at the National, I took it on a little because I didn't have one to jump and I knew it could jump bigger jumps. All of a sudden, the partnership came – and it got better and better. It worked for me. I kept riding it. He's been great for me all summer."

Deslauriers said it's impossible to forecast when the necessary chemistry between horse and rider develops. But when it does, it's magic.

"Some horses will go better for a certain type of rider," he said. "A horse that has a lot of blood usually suits me better because I'm a calmish type of rider. He's a little quirky, a little finicky, but I can handle that. Some riders ride with more physical strength, so they need a heavier type of horse. It's all about the different aspects of how you ride and how you can form a partnership. This one came along really quickly for me."

Deslauriers is now 52 and rode at Spruce Meadows for the first time as a 14 year old. A lot has changed since then. This Sunday, Spruce Meadows offers a staggering $3-million purse for the CP International, presented by Rolex, arguably the most prestigious Grand Prix in the sport.

Scott Brash of Britain is the two-time defending champion. Millar won the event in 2014 and Lamaze in 2011.

"This is an incredible facility," Deslauriers said. "In my book, this is the best. I mean, Aachen [Germany] is also a place where all riders love to show. But it's amazing, the way this place grew up. When I first came here, we were coming only for the National. We'd show in Edmonton, show here and then we'd go back out east to Toronto, Bromont, St. Adele [Que.], Quebec City. We used to stay at the Relax Inn and it was the last place on the road before you got here – and it took 20 minutes by car. Now, look, we're in the middle of Calgary.

"We come here every summer, but I haven't been to the Masters in a long time. So I'm happy to be back. This is so exciting for me."

Ian Millar ready to hand over the reins to next generation of Olympians
May 16, 2018 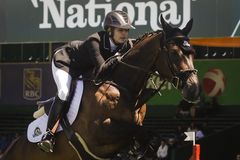 Follow Eric Duhatschek on Twitter @eduhatschek
Report an error Editorial code of conduct
Due to technical reasons, we have temporarily removed commenting from our articles. We hope to have this fixed soon. Thank you for your patience. If you are looking to give feedback on our new site, please send it along to feedback@globeandmail.com. If you want to write a letter to the editor, please forward to letters@globeandmail.com.
Comments