Penny Oleksiak had barely touched the wall in her gold-medal winning performance in the women's 100-metre freestyle when the cry went out: give her the flag now! The flag referenced is the one carried by a member of the Olympic team at the closing ceremonies, an honour bestowed upon the athlete considered most worthy by the Team Canada delegation. And in the immediate euphoria that Ms. Oleksiak's historic run generated it was impossible to argue with the sentiment.

But as we draw closer to that moment, the choice has become a little less definitive thanks to equally inspiring accomplishments on the track by sprinter Andre De Grasse. Now the athletes who will make this decision have a quandary they likely never imagined; a choice between two delightful human beings who have at these Games affixed themselves to the top rung of their sports at remarkably young ages.

What a wonderful dilemma for this nation to have.

A week ago there was no debate. Ms. Oleksiak had won two bronze in relay events and a silver in the 100-metre butterfly. But it was her shocking, come-from-behind gold in swimming's glitziest event – the 100-metre freestyle – that made her a worldwide sensation and a cinch as the flag bearer choice.

In 52.70 seconds Ms. Oleksiak established herself as not only the most decorated Canadian Summer Olympian ever but the arguably greatest swimmer in the country's history. She served notice that, at the age of 16, her feats in the pool are just beginning. She could be the most celebrated swimmer on the planet for some time.

As a reward she received tickets to a Drake concert she'd been dying to go to. Whether her parents allow her to stay out that late is another thing.

And then along came 21-year-old Andre De Grasse.

While he will not win as many medals as Ms. Oleksiak, Mr. De Grasse's post-Olympic resume will be impressive nonetheless. A bronze in the 4X100-metre relay and 100-metre and a silver in the 200-metre. In the last two races, he was a mere breath behind the greatest sprinter of all time, Usain Bolt, in what was likely his last act on the Olympic stage. It was not difficult to imagine a generational baton being passed from the Jamaican superstar to the little guy from Canada he seemed to regard as a kid brother.

And so the flag bearer decision.

It is impossible to make straight-line comparisons between the two athletes. It's not like you get three points for a bronze, four for a silver, five for a gold, add them all up and, presto, there is your end-of-Games flag bearer. Golds do hold more weight in an athlete's mind. You have established yourself as the best in your sport, the ultimate aspiration of any Olympian.

The athletes may take into account the sport itself; the 100-metre dash is unquestionably the most glamourous event at the Summer Games. There may be some who feel that medalling in it, whatever the placing, should be worth more. De Grasse may get votes in recognition of the fact he was up against the fastest man who ever lived. Ms. Oleksiak was not racing against the female equivalent of Michael Phelps.

Then there are intangibles like personality. Who do the athletes know better? Who was more approachable? Who stayed in the Athletes Village with the team as opposed to being ensconced off-site in more upscale and desirable digs? In an exceptional close ballot more ephemeral matters like this could make a difference.

Could gender play a role? Of the 314 athletes on the Canadian team, nearly 60 per cent are female, the most ever on a Summer Olympic team.

In my view, the choice for flag bearer may be more difficult than people once imagined but in the end it will be Penny Oleksiak. What she did in the pool at such a young age, the manner in which she so spectacularly entrenched herself in the Canadian and worldwide swimming firmament, can't be rivalled.

The order of events can sometimes skew our perception of things. For the last few days we have been focused on Mr. De Grasse and the feel-good nature of his relationship with Mr. Bolt. Ms. Oleksiak's out-of-nowhere feats in the pool seem a while ago now, the intense feelings of pride she gave a country a little faded from our collective memory. Now reverse the order of the two events and the conversation we're having right now would seem moot; the outcome of the vote more obvious.

On Sunday, at the Olympic Stadium, Penny Oleksiak will carry Canada's flag. And in every way, Andre De Grasse will be helping her carry it, too. 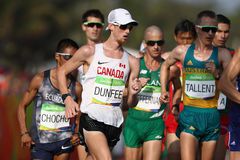 ‘Anything is possible’: Beverley De Grasse marvels at son’s sprint to the top
May 16, 2018 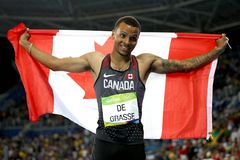 De Grasse’s plan was to beat Bolt by making him run faster. It almost worked. Here’s why
November 12, 2017 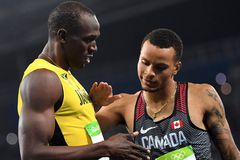