In the midweek lead-up to what it so badly wanted, the U.S. Open tried coining a phrase.

"Could this be the year of #Fedal in NYC?" the tournament "said" on its social media account.

That is not a word, never has been, and you knew then that the whole thing was cursed. There was only one way to redeem this sad, little nub of a tennis tournament, and by saying it out loud, the U.S. Open ruined everything.

Never hashtag, people. You're better than that.

As you have already heard six bajillion times, Rafael Nadal and Roger Federer have never played each other at Flushing Meadows. It's beginning to look like they never will. And, honestly, we should all be okay with that.

On Wednesday afternoon, as Nadal was winning his quarterfinal and on target to meet his defining rival in the semis, courtside seats to Friday's evening session were being resold for up to $10,000 (U.S.) each. Ten thousand. With a thousand at the end.

Who are the people who buy these things? Wouldn't they prefer a gently used Honda instead? Because they should.

Arthur Ashe Stadium is the worst venue in tennis, roofed or otherwise. It is cavernous and echoey and watching sports there is akin to watching a neighbour half a block down the street play horseshoes from on top of your roof. You can tell that there are two people out there doing something physical, but that's about it.

It's a living hell to get there because … calm yourself … it involves the New York subway system. Which you will have heard is in some chaos this summer.

Once you're there, you will have to buy champagne because that's how it's done. It doesn't matter if you like champagne or not. It's expected. Everyone around you is blind drunk, so you might as well be, too.

The guy beside you will be – guaranteed – a Federer superfan from Hackensack, wearing a Federer hat and a Federer shirt and a bad Federer haircut. He'll spend the whole time screaming, "Allez!" though he has no idea what it means and thinks it's a "Swiss" word.

The super-rich were saved this pain in the ass when Federer lost on Thursday night to Juan Martin del Potro, the man who is the Brazil of tennis. He's everybody's second-favourite player.

"It should hurt. It does," Federer said afterward. "But with the season I've had, I have perspective on these losses. I'll be fine."

God love him, but it's not exactly the cri de coeur you were hoping for. "I wanted Diet Coke, but all they had at Shoppers was Pepsi. Do not worry. I have perspective."

I suppose the expected emotion upon missing out on a 38th Nadal/Federer tilt is disappointment, but I can't get there. We know what those two guys can do. For its own sake, men's tennis needs to start moving on from its top-two fetish.

And not just as far as Andy Murray and Novak Djokovic, who are exactly like their better, older peers, only boring.

Tennis needs to turn a page, rip the page out, then find a new book. We've been at this for a decade and it started to get old when Stephen Harper was still in charge.

People have been talking about it for years, but this U.S. Open has been the rare major to offer tangible glimmers of the future.

Until his vastly entertaining implosion against del Potro, Dominic Thiem finally looked the business. I'm not sure the solution to anything is "Get an Austrian on the horn," but tennis might be the exception.

Andrey Rublev – the Russian equivalent of having the bad luck to be named Hemingway and deciding to call your son "Ernest" – was likewise a sound substitution to the tedious stand-and-bash school that's come up as a poor alternative to Federer.

Kevin Anderson, a 6-foot-8 South African who looks as if he was built in an underfunded evil laboratory, is still in the tourney. But he won't last long. He's emblematic of yesterday's man.

The most hopeful example of what's to come was Canada's Denis Shapovalov. The 18-year-old is not just the national successor to Milos Raonic. He's the preferred alternative.

Finally, here is someone with the energy and elegance to take tennis back to the future – the one Federer and Nadal will not vacate voluntarily.

While those two have taken the game to its highest heights, they've also ruined it for everyone else.

They're the crack of every slam, and all of us need a hit. If one or the other goes out, everything dims. Unless they meet in a final, it all seems slightly pointless. No one will give a good goddamn about who wins on Sunday, because the real final didn't happen. That's the way most people think.

As Nadal's health deteriorated and Federer got old, there was the suggestion that people would begin moving on. But 2017 has been a step backward.

Federer's Wimbledon win in July cemented his status as one of the greatest all-round athletes in history, and put him in the same league with Ali, Jordan and Pelé. Nadal will never occupy that space, but he remains the most likeable second fiddle in sports history, largely by force of geniality.

Though it's an individual sport, these two are functional teammates. One cannot exist in the collective imagination without the other. It's all been enormous fun to watch, going all the way back to their first meeting in 2004.

This is not wishing that either man should leave the stage. Both still have a lot to give. But it's time for new heroes and new rivalries. It's time to move on from the greatest rivalry in the history in men's tennis.

All that's required is that somebody do it.

No Rafa vs. Roger at U.S. Open as del Potro beats Federer in quarter-final
December 5, 2017 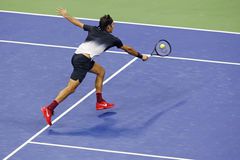 Hip injury likely to keep Andy Murray off the court for rest of season
September 6, 2017
Follow us on Twitter @globeandmail Opens in a new window
Report an error Editorial code of conduct
Due to technical reasons, we have temporarily removed commenting from our articles. We hope to have this fixed soon. Thank you for your patience. If you are looking to give feedback on our new site, please send it along to feedback@globeandmail.com. If you want to write a letter to the editor, please forward to letters@globeandmail.com.
Comments