The trickle of complaints about Netflix Inc.'s renewed effort to stop Canadians from circumventing its geographic content restrictions has turned into a steady stream of outrage as the Los Gatos, Calif., company's technological crackdown begins to bite more users globally.

Users took to Twitter and Reddit this week to vent as more and more virtual private networks (VPNs) and DNS masking software appear to be outmanoeuvred by Netflix's assault on such location-spoofing services.

Popular service Unblock-us has been offering refunds to users who barraged its Twitter feeds saying they were getting error messages when attempting to connect to Netflix. U.S.-based Open Media's petition asking Netflix to back off the crackdown has collected more than 40,000 signatures from global users.

On Jan. 14, the streaming video company warned its customers that it was "Evolving Proxy Detection as a Global Service," which meant bad news for the roughly 30 per cent of Canada's almost four million Netflix subscribers who are believed to be using so-called unblocking services that allow them to log into the U.S. content catalogue.

"It's a very small but quite vocal minority," chief executive officer Reed Hastings said during Monday's earnings interview. "So it's really inconsequential to us, as you could see in the [first-quarter] results."

Netflix also announced Monday that its prices would begin to rise even for long-time users, whose monthly payments had been "grandfathered."

Not everything about Netflix Canada is inferior to the U.S. version. While there are about 3,100 movies and TV series to choose from (about 53 per cent of the U.S. library), Canada will have exclusive streaming rights to Star Wars: The Force Awakens this summer.

The company's catalogue weakness is more stark elsewhere, according to NordVPN (an opponent of Netlfix's crackdown). Australia's content library has just 2,000 titles and India's has only 875.

Increasingly, Netflix prefers to deflect complaints about localized content libraries by touting its Netflix Originals, which are available in every territory.

"Our ambition is to do global licensing and global originals, so that over maybe the next five, 10, 20 years, it'll become more and more similar until it's not different," Netflix chief product officer Neil Hunt explained in an interview at the Consumer Electronics Show in Las Vegas in January.

Some angry VPN users promised that they would return to pirating shows with file-sharing technologies, such as BitTorrent, if they can't find a way to pay for the content they want to watch.

But recent studies raise the question of whether content blocking will do much to deter the hide-and-stream behaviour of some Netflix users. Carnegie Mellon University and Wellesley College released a study this month that measured the impact of a British court's 2014 order that Internet service providers block the top 53 pirate content sites.

Pirating is different from unblocking, but while in Britain there was a predictable 90-per-cent drop in visits to those blocked sites, there was no bump in traffic for unblocked sites. There was a 22-per-cent drop in piracy, but not nearly as big a move toward paid channels. "We also found that these blocks caused a 6-per-cent increase in visits to paid legal streaming sites like Netflix and a 10-per-cent increase in videos viewed on legal ad-supported streaming sites like BBC and Channel 5," the study states.

And as a side-effect, users who employed VPNs before the crackdown increased their attempts to circumvent the blocks by about 30 per cent after the fact.

"The evidence suggests that blocking large numbers of sites can still 'move the dial' in terms of consumer behaviour, but that there may be diminishing returns as remaining pirates may be more dispersed or else have lower willingness to pay for legal content," the study concluded.

What's a VPN, are they legal and does Netflix care Canadians use them?
June 5, 2017
Canadian researcher proposes new way to shut down Netflix ‘content tourists’
May 16, 2018 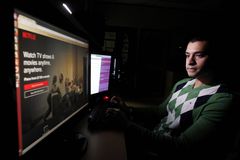