The plan seemed straightforward, even if politically fraught: A worried cross-party majority in Britain’s House of Commons would pass a motion of no-confidence in Prime Minister Boris Johnson’s government, preventing him from carrying out a no-deal departure from the European Union on Oct. 31, forcing a general election instead.

The gambit should have had enough support, given that Parliament expressed its opposition earlier this year – by a 43-seat margin – to the kind of no-deal Brexit Mr. Johnson is bracing the country for. But the parliamentary coup looks to have foundered, for now, on the tangled question of who would be interim prime minister if Mr. Johnson were indeed ousted.

Even some of the staunchest pro-European MPs have said they aren’t willing to support the plot – put in writing this week by Labour Leader Jeremy Corbyn in a letter to MPs he hoped might support it – if it would install Mr. Corbyn in the top job. Jo Swinson, Leader of the Liberal Democrats, said her party wants to prevent a no-deal Brexit, but Mr. Corbyn is “too divisive” to head an interim government.

The standoff illuminates the depths of Britain’s political crisis as the country hurtles toward a defining moment.

Mr. Johnson moved into the Prime Minister’s Office just three weeks ago. His predecessor, Theresa May, resigned after the withdrawal agreement she negotiated with the EU was rejected three times in Parliament. The Conservative-led government still lacks a functioning majority in the House of Commons, and millions have marched in opposition to Brexit – with many calling for a new referendum, hoping to overturn the narrow 2016 vote in favour of leaving the union.

But the Opposition is in equal disarray. Mr. Corbyn, a lifelong socialist reviled by Labour’s centrist wing (which prevailed during the Tony Blair years) and who has battled accusations of anti-Semitism in his inner circle, has struggled to unify the party around his leadership.

As the country heads toward a tumultuous autumn, the Labour Leader may prove to be Mr. Johnson’s greatest asset. The Prime Minister faces a rebellion within his own party over Brexit – party grandee Philip Hammond, who was chancellor under Ms. May, this week accused Mr. Johnson’s government of deliberately destroying any chance of a negotiated departure from the EU – but MPs seem unlikely to oust Mr. Johnson in favour of the even-more-polarizing Mr. Corbyn.

“Having to put someone in [the Prime Minister’s Office] who is perceived to be so extreme makes a massive difference,” said Anand Menon, director of the UK in a Changing Europe project at King’s College in London. “Whilst temporary might be temporary, they’re still going to be PM, and in their first hour, they’re going to be sending messages to submarine commanders.”

Meanwhile, politicians in London and Brussels say they are preparing for what has long been viewed as the worst possible outcome: The United Kingdom leaving the 28-country bloc on Oct. 31 no deal to govern issues such as trade, customs and the extremely sensitive question of what kind of border to have between Northern Ireland and Ireland, which will remain an EU member.

Mr. Corbyn’s no-confidence plan was welcomed as a basis for talks by the Scottish and Welsh nationalist parties, a handful of rebel Conservative MPs and the lone Green Party representative. However, Ms. Swinson’s refusal to support Mr. Corbyn effectively scuppered the effort.

Ms. Swinson said an “emergency” government should be led by someone who could command the respect of the House, naming Kenneth Clarke, a pro-European Conservative who has held a seat in Parliament since 1970, and Labour’s Harriet Harman, the longest-serving female MP, as potential candidates. But Mr. Corbyn said on Friday that he would not stand aside.

“Under the normal constitutional processes in Britain, when a government collapses, the leader of the main opposition party is called upon to form a government,” he told reporters. “It’s not up to Jo Swinson to decide who the next prime minister is going to be.”

An election, if one were held, would likely return a Parliament just as divided over Brexit as the current one. The most recent YouGov poll showed the Conservatives with 31 per cent support, ahead of 22 per cent for Labour, 21 per cent for the Liberal Democrats, and 14 per cent for the single-issue Brexit Party.

Speculation lingers that Mr. Johnson – who has vowed to deliver Brexit “do or die” on Oct. 31 – could prorogue Parliament on Sept. 3 to ensure it doesn’t block his plan. That’s led to fevered media debate about whether the Queen, as head of state, might have a role to play in deciding between a Prime Minister who says he intends to carry out the will of the public as expressed in the 2016 referendum, and a Parliament that has already voted to reject a no-deal departure.

Among the scenarios U.K. political scientists find themselves contemplating is the possibility that Mr. Johnson could lose a no-confidence vote in the House of Commons but still be Prime Minister through Oct. 31 because the opposition cannot form an alternative government. That kind of parliamentary gridlock would almost guarantee a no-deal Brexit.

Mr. Johnson has repeatedly said he’ll pull Britain out of the EU without an agreement if Brussels refuses to budge from Ms. May’s deal. The EU has said it will not reopen the withdrawal agreement.

“The question we have to ask is: ‘Does the government really, really want to leave the EU without a deal? Is it really willing to risk the consequences of that? Or is this a position taken to convince the EU to renegotiate, specifically the question of the Irish [border]?’ None of us has the answer to that,” said Tony Travers, a professor of government at the London School of Economics.

“The chances of a no-deal Brexit are evidently higher than they were a month ago, or six weeks ago.” 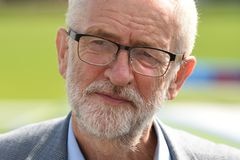 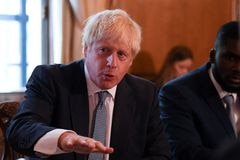