In a rare public moment of contrition for a member of the royal family, Prince Andrew said this week that it was wrong for him to have stayed at the New York City town house of Jeffrey Epstein after the financier had served time for soliciting a minor for prostitution.

The Duke of York was confronted about the 2010 visit to Epstein’s Manhattan mansion during an interview with the BBC.

It followed the August publication of photos and video from Andrew’s stay with Epstein, a convicted pedophile at the time, by The Daily Mail.

“That’s the bit that, as it were, I kick myself for on a daily basis because it was not something that was becoming of a member of the royal family,” Andrew, 59, said. “And we try and uphold the highest standards and practices, and I let the side down, as simple as that.”

The full interview is set to air Saturday night on BBC Two, which released excerpts from it Friday.

The second son of Queen Elizabeth II, Andrew has faced scrutiny for his ties to Epstein, the disgraced financier who faced a raft of sex trafficking and abuse charges before taking his own life in August in a Manhattan jail cell.

The glare was so intense that it prompted Buckingham Palace to take the rare step of issuing a statement when Epstein died in which Andrew said he was “appalled” by the allegations against Epstein and rejected any suggestion that the prince would take part in the “exploitation of any human being.”

While Andrew expressed remorse in the interview over accepting Epstein’s invitation to stay with him, he denied allegations in a legal filing that Epstein lent one of his accusers, Virginia Roberts Giuffre, to him for sex on several occasions when she was 17.

“I have no recollection of ever meeting this lady,” Andrew said. “None whatsoever.”

Emily Maitlis, the BBC journalist who sat down with Andrew, said in a post on Twitter that it was a “no holds barred interview,” adding that none of the questions were vetted ahead of time.

Exactly what the prince knew about the allegations against Epstein has been a point of contention in the months since the U.S. businessman was arrested on sex trafficking charges in July. Andrew has been accused of witnessing and taking part in the sexual exploitation of young women and girls during his decadeslong friendship with Epstein.

As details of Epstein’s alleged sexual abuse and trafficking of women were laid out, allegations of involvement by Andrew began to emerge.

In 2011, a photo was published that Giuffre said was taken in 2001 and showed Andrew standing alongside her in a London apartment with his arm wrapped around her bare waist, with Epstein’s former girlfriend Ghislaine Maxwell standing in the background.

Maxwell, a British socialite, has been named by many of Epstein’s accusers as an active participant in recruiting young women, some of them under the legal age of consent, for him to groom, traffic and exploit. She was also a friend of Andrew.

After an August hearing in which many of Epstein’s accusers spoke publicly for the first time, Giuffre called on Andrew to “come clean.”

“He knows exactly what he’s done, and I hope he comes clean about it,” Giuffre said.

Another woman, Johanna Sjoberg, said in unsealed legal filings in the same 2015 case that Andrew posed for another photograph in 2001 touching her breast and touching Giuffre’s breast with a puppet of himself. The prince has repeatedly denied both allegations.

Since Epstein’s death, lawyers for Epstein’s accusers have demanded that the prince provide a full account of his knowledge of the allegations.

Andrew made a rare, brief statement on the situation in August, saying that he never saw or suspected any behavior involving the sexual trafficking and exploitation of underage girls during his friendship with Epstein.

“I deplore the exploitation of any human being and would not condone, participate in, or encourage any such behavior,” he said. “At no stage during the limited time I spent with him did I see, witness or suspect any behavior of the sort that subsequently led to his arrest and conviction.”

Andrew said he first met Epstein in 1999, and the pair were photographed together several times after that. Investigations into accusations against Epstein began in 2005 in Florida, but more than a decade ago, Miami prosecutors made a secret deal with the financier that allowed him to avoid federal prosecution by pleading guilty to two state prostitution charges. He spent about a year in a Florida jail.

British tabloids have published footage of Epstein and the prince in New York that was said to have been taken in 2010, shortly after the financier’s release from prison. Andrew has been widely criticized for apparently maintaining a relationship with Epstein after the sex crime conviction. 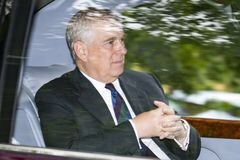 Buckingham Palace strengthens defence for Prince Andrew against underage sex claims
December 15, 2017
Report an error
Due to technical reasons, we have temporarily removed commenting from our articles. We hope to have this fixed soon. Thank you for your patience. If you are looking to give feedback on our new site, please send it along to feedback@globeandmail.com. If you want to write a letter to the editor, please forward to letters@globeandmail.com.
Comments are closed