With songs, speeches and solemn silence, relatives and friends on Wednesday commemorated the 298 passengers and crew killed five years ago when a missile blew Malaysia Airlines Flight 17 out of the sky above war-torn eastern Ukraine.

Central to the memorial service at a Dutch monument to the MH17 disaster was the reading of the names of all those who died when a Buk missile shattered the Boeing 777, which was heading from Amsterdam to Kuala Lumpur in Malaysia, as it passed over eastern Ukraine on July 17, 2014.

It took nearly a half-hour for family and friends – some choking back tears – to read out the names and ages of the victims.

“Miss you sis,” said Monika Beaujean, as she read out the name of her twin sister, Gaby Lauschet from Sydney, Australia.

Beaujean travels each year from her home in Brisbane to be at the annual memorial services.

“She’s my twin sister, and when that happened I thought I’m losing a wing,” she said. “And for me it is so important to come back to try to fly with one wing, and I’m hoping that I can do that one day.”

The service, attended by more than 1,000 people, happened at a monument surrounded by trees, one planted for each victim, close to Schiphol Airport, where the passengers boarded the flight.

Nearly 200 of the victims were Dutch; the others came from a variety of countries, including Malaysia, Australia, Canada, Britain and Belgium.

In the five years since the plane was shot down, a Dutch crash investigation ruled that a Buk surface-to-air missile brought down the Boeing 777.

A separate criminal investigation concluded that the missile system was trucked into Ukraine from Russia.

Last month, a Joint Investigation Team made up of detectives from the Netherlands, Malaysia, Australia, Ukraine and Belgium said it will prosecute four suspects, in their absence if necessary, at a trial set to start in March.

The suspects are three Russians with links to their country’s intelligence services and a Ukrainian who led a separatist combat region in Ukraine’s Donetsk region.

They are charged with involvement in the murder of all those who lost their lives. The team said even if the four may not have personally launched the Buk missile that downed the plane, they were implicated in the preparations of the launch, making it sufficient to charge them.

Russia has called the charges “absolutely unfounded” and accused investigators of using “dubious” information and ignoring evidence provided by Moscow in order to discredit Russia.

In an emotional speech, Dutch Prime Minister Mark Rutte called the downing “a shameful deed that robbed 298 innocent people of their lives.”

And speaking about the desire of relatives to see justice done, Rutte said it requires patience and “trust that flagrant lies and deliberate disinformation campaigns will never triumph over incontrovertible facts.”

Ukraine’s Security Service said Wednesday it has arrested the driver of the towing trailer that transported the Buk across the border.

Vitaly Mayakov of the SBU’s Chief Investigative Department told reporters that they tracked down a local Donetsk man who was approached by separatists and asked to tow the Buk. Mayakov said the man was convicted and is currently in prison but did not say what the charges against him were.

He also said the SBU is investigating 150 people in connection with the MH17 downing.

In Kuala Lumpur, relatives of the Malaysians on board lit five large white candles to mark the anniversary and observed a minute of silence at a ceremony jointly organized by the Australian and Dutch embassies that featured 298 sunflowers.

Despite conflicting signals from Malaysia’s government, the relatives said they supported findings of the international investigative team that led to the four suspects being charged with murder.

Patrick Sivagnanam said his family supports the findings as the international team was the only group probing the case.

But he said time hasn’t healed the pain of losing his brother, Paul Sivagnanam, his sister-in-law Mabel Soosai and his 10-year-old nephew Matthew Ezekial.

“It’s a nightmare that lasted for five years. And unfortunately, it will probably never end,” he said.

Three Russians, one Ukrainian to face murder charges over downing of flight MH17 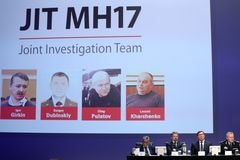 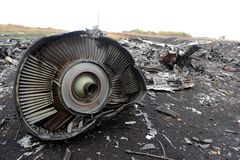 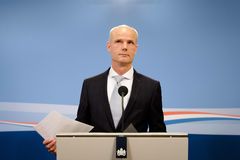