Virginia’s highest court on Friday upheld a ban on firearms at an upcoming pro-gun rally in the state’s capital, an event that authorities feared could erupt in violence at the hands of armed extremists.

The lawsuit and court rulings came as the FBI arrested six men whom authorities linked to a white supremacist group known as The Base. At least three of them were planning to attend the pro-gun rally Monday on the grounds of the state capitol in Richmond, according to an official who spoke to The Associated Press on condition of anonymity to discuss an active investigation.

Virginia has become Ground Zero in the nation’s raging debate over gun control, as a new Democratic majority in the state legislature has promised to pass an array of restrictions, including universal background checks and a red-flag law.

Gun-rights groups argued Northam’s ban would violate their Second Amendment right to bear arms and their First Amendment freedom of speech. But a Richmond judge upheld the ban on Thursday, citing rulings from the U.S. Supreme Court and other courts that the Second Amendment is not unlimited.

The state Supreme Court did not say whether it agreed with the lower court’s assessment. In a terse, two-page ruling, the court said it did not have enough information “to discern whether the circuit court abused its discretion” in rejecting the gun-rights groups’ request to lift the ban.

The court noted that it did not have a transcript of the hearing or a written statement of facts describing details of the hearing.

Northam praised the ruling, saying in a written statement that keeping the ban in place would “help to ensure the safety of all Virginians” during the rally on Monday, which is also a federal holiday honouring Martin Luther King Jr.

Philip Van Cleave, president of the Virginia Citizens Defence League — the group sponsoring the rally — called the first ruling “mind-boggling.” The group did not respond immediately to the Supreme Court ruling.

President Donald Trump jumped into the fray on Friday, tweeting that the Second Amendment “is under very serious attack in the Great Commonwealth of Virginia.”

“That’s what happens when you vote for Democrats, they will take your guns away,” Trump tweeted.

In his legal brief to the high court, Herring called Northam’s ban “a carefully limited Executive Order” that “does not prevent anyone from speaking, assembling, or petitioning the government.”

“Instead, it temporarily precludes private possession of firearms in a sensitive public place during a specified time to protect public safety,” the brief says.

Herring argued Northam’s order would help prevent the kind of violence that erupted at a 2017 white nationalist rally in the city of Charlottesville. One woman was killed and more than 30 others were hurt when a white supremacist drove his car into a crowd. No one was wounded by gunfire at the rally.

The FBI has said the six men arrested — in Delaware, Georgia and Maryland — were linked to The Base, a collective of hardcore neo-Nazis that operates as a paramilitary organization. The Base has proclaimed war against minority communities within the United States and abroad, the FBI has said. Unlike other extremist groups, it’s not focused on promulgating propaganda; instead the group aims to bring together highly skilled members to train them for acts of violence.

One of the arrested men had discussed travelling to Ukraine to fight alongside “nationalists” and compared the white supremacist group to al-Qaida, a prosecutor said in court Thursday.

Shannon Watts, founder of Moms Demand Action, a non-profit advocacy group looking to curb gun violence, told reporters on a conference call Friday that online threats against the group’s employees and volunteers have also increased, comparable to what they’ve seen previously in the run-up to large pro-gun rallies.

She noted that many of the expected rally participants are not Virginia residents, while those who harbour the most extreme views represent “just a very vocal minority.”

“Their views are not representative of the majority of Virginians,” she said.

Because of the threat of possible violence, organizers of an annual vigil for victims of gun violence — usually held on the King holiday each year — said Friday that they have cancelled their event this year.

“Given the serious concerns about possible violence on Monday, we recognize that we can not guarantee the safety of the brave gun violence prevention activists and survivors who have fought so hard for this day,” said Lori Haas, state director of the Coalition to Stop Gun Violence.

As state officials and gun-rights groups battled over the ban in court, a package of gun-control bills was moving through the legislature, which is now in Democratic control.

The Senate on Thursday passed legislation limiting handgun purchases to once a month, requiring universal background checks on gun purchases, and allowing localities to ban guns in public buildings, parks and other areas. The bill was passed along partisan lines. It will now go to the House for consideration. 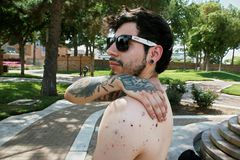